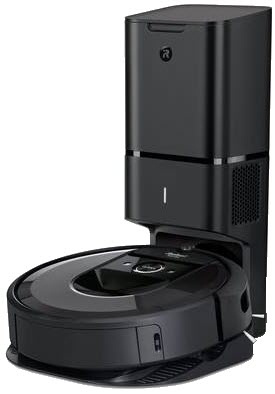 We purchased our first “robotic” vacuum cleaner back in 2005 (the Roomba Red) and since then we’ve owned two more, the last being the 589 Core (which was a warranty replacement for our 530 in February 2014). I had replaced the battery a few times already in the 589, so when it stopped holding a charge again we decided to get a whole new unit and bought the iRobot Roomba i7+ with Clean Base.

Robotic vacuum technology has come a long way: our previous Roomba’s were pretty “dumb” compared to the i7. The would randomly wander around the house, constantly bumping into furniture and eventually would clean most of the room. They would stop wherever they were when they were done (or their battery died) so there was always a scavenger hunt to “find the Roomba” (which would inevitably be under a bed or in the closet). All of those first-world problems seem to have been solved in this iteration of iRobot’s little cleaner.

The i7 still has the classic round Roomba shape (the newest high-end s9 is the first model with a flat front). The underside still sports the two wheels, brushes, and side spinning brush familiar to any Roomba owner and on top are the same three basic buttons: Home, Clean/Power, and Spot Clean, plus a camera (which is apparently used to recognize objects and rooms but does not record video or photos). But honestly, you might never actually physically touch those buttons because, like any other “smart home” device nowadays, the i7 has WiFi and a companion app you can use to control it (and yes, there’s an Amazon Echo skill so you can use Alexa too). Once connected to your wireless network (mine is on the separate IoT subnet, of course), you can use the iRobot Home app to configure all of the advanced options. Such as?

Room mapping is (to me) what makes the Roomba i7 so slick. You can send it on a few training runs (it doesn’t run the vacuum or brushes so the battery lasts longer) and it will act like the classic “dumb” Roombas and fumble its way through your house. I was skeptical at first, but after three training runs, it had built up a pretty accurate representation of our house in the app (there were some privacy concerns when iRobot first rolled out this feature but I’m a tech/gadgets guy so I wanted to see how all the features worked (and you can opt out of these advanced features if you want)). My daughter was laughing at me because I was following the Roomba around as it mapped the house, but it was fascinating to watch and as a computer guy I was thinking about the hardware and software driving this “intelligence.”

When the Smart Map is complete, you can customize it in the app to add room separators, “keep out” zones, and name the rooms (up to 14 per map): 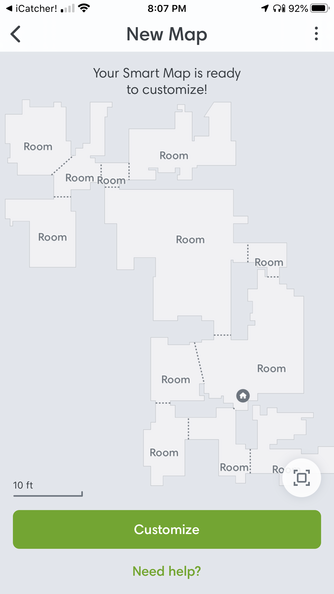 Once that’s done you can tell the Roomba to vacuum specific rooms. Since it knows where its home base is located on the map (the little house icon), it will go directly to the location, avoiding obstacles it knows about (like large pieces of furniture). It’s pretty cool to watch it make a bee-line for the selected room going right through doorways, without hitting anything (unless you’ve moved a chair or something it doesn’t know about, but it’ll bump its way around and resume).

Of course this means you can’t (or shouldn’t) just pick up the Roomba and put it somewhere else because it will then lose its place on the map. This really isn’t an issue, though, because when the robot is low on battery it will return to home base to re-charge itself and then resume where it left off. So you can tell it to clean all the rooms it knows about and it will clean, re-charge, clean, repeat until its done. 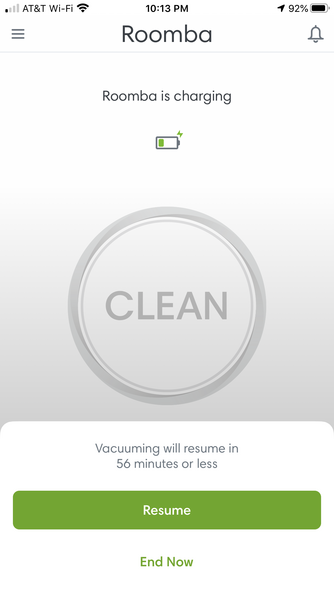 charging during a cleaning run

No more “find the Roomba” because if it’s not out cleaning, it should be back on its base (although there is an option in the app to have the Roomba “make a noise” so you can find it, so it’s possible it doesn’t make it back home for some reason, like it gets stuck).

I have a one-story house so it’s a pretty simple map but apparently you could have multiple maps (for, say, multiple floors, or multiple homes?). I’m guessing if you’ve got more than one floor you’ll have to gasp manually move your Roomba to that second floor before starting a cleaning run. 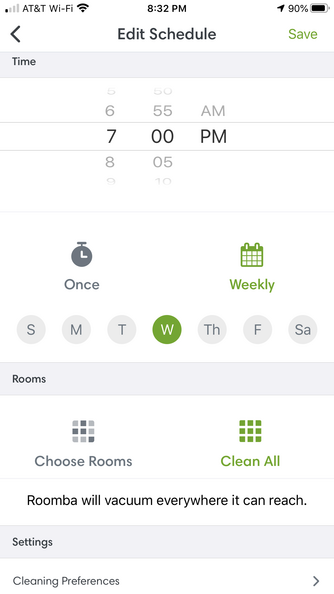 You can keep tabs on your Roomba and the cleaning jobs it has completed in the history section of the app. Here you can get stats on individual runs, coverage maps, and lifetime stats. Each run will show you which areas the Roomba cleaned on the coverage map. 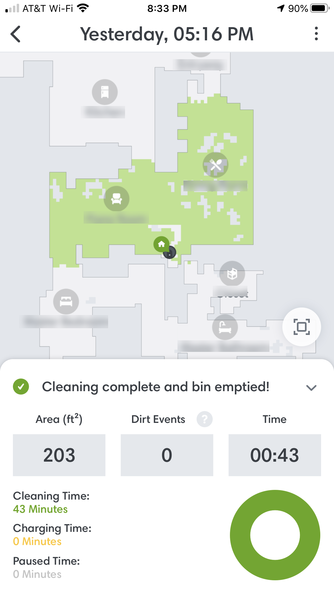 The base model (no pun intended) of the i7 comes with a basic charging dock. We got the bundle that included the Clean Base dirt bin (you can buy this option separately, but it’s a little cheaper if you get the bundle). The Clean Base is the charging station which contains an automatic dirt bin and comes with a different dirt bin for the Roomba itself (it has a small vent on the bottom which aligns with a port on the base (this is pre-installed if you get the bundle)). When the Roomba returns home after a cleaning run, it automatically empties itself by triggering a vacuum in the base which sucks all the dirt out of the Roomba and into the bin. Basically it’s vacuuming out your vacuum. There’s a small bag in the bin to collect the dirt and the app will alert you when this needs to be emptied/replaced. The bundle came with two bags to start and they cost about $5/ea on Amazon, so that’s an additional consumables cost compared to our older Roomba, but the convenience of having the robot automatically charge and empty itself is worth it. I’ll have to see how long it takes for the bag to fill though.

I haven’t played with this much yet, but there’s an Alexa skill you can link to your iRobot account for voice commands. Instead of using the app on my phone, I can just say “Alexa, tell Roomba to clean the family room” and it will send the Roomba on its merry way. You can apparently also use this to set up schedules, or send the robot back home. This also works with Google Assistant, and there are even a bunch of IFTTT applets (if I get a phone call, pause Roomba).

It’s only been a few weeks since we got the i7 but so far I’m impressed! I don’t know how much better the cleaning technology is (we have all tile floors so they’re pretty easy to vacuum) but the mapping technology is impressive and really makes the Roomba an impressive piece of robotic tech.