Hey, just so you know ... this post is now about 3 years and 5 months old. Please keep that in mind as it very well may contain broken links and/or outdated information.

“Infrastructures are essential to everyday life, but they are always the supporting player, never the goal. It is only when there is trouble that the infrastructure is noticed …” -Donald Norman, The Invisible Computer 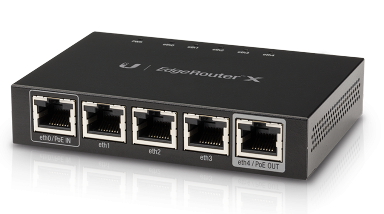 There was nothing wrong with my almost 5-year old Buffalo router, but after hearing Steve Gibson talk about the $50 Ubiquiti EdgeRouter-X on episode #569 of the Security Now! podcast, I knew it was time to replace the Buffalo.

Unlike most consumer/home routers, the ER-X has no built-in wireless. It’s a router, not an access point. This wasn’t a problem for me since I hadn’t been using the Buffalo for wireless since I had put in the Ubiquity UniFi AP two years ago (and now my AP and new router are from the same manufacturer). Also unlike your average consumer router, the ER-X has five logical interfaces behind its five physical ports (eth0 – eth4). This means you can configure the individual ports however you want. Each port can be its own separate subnet, you can group ports into a switch, bridge ports, etc. (I’m using the traditional 1 WAN port (eth0) plus 4 switched ports (eth1 – eth4) setup). The ER-X can be powered with the included AC brick, or via (non-standard, not 802.3af) 24V passive PoE input on eth0 (which can then do PoE passthru to eth4 to power, say, a UniFi AP). For now I’m using the AC adapter and not PoE.

For the past 9 years I’ve run DD-WRT on my home routers but now, with the ER-X, I’m learning Ubiquiti’s EdgeOS. It’s got a pretty slick interface, although not all of the router’s features are available to configure through the GUI (like setting up a PPTP VPN connection), so some command line interface (CLI) interaction is required. SSH’ing into the router and using the shell to set the more advanced options should be familiar to anyone with Linux experience (once you learn a few Ubiquiti-specific configuration commands).

The driving factor behind switching routers was attempting to re-organize my home network with three separate, isolated segments:

I’m still finalizing the configuration, but so far I’ve set up the three wireless SSIDs on the UniFi AP and tagged two of them (guest and IoT) with VLANs. On the ER-X, I created the two VLANs (on the switch), tagged them on eth4 (the port connected to the AP), set up DHCP servers for the three segments on 192.168.1.0, 192.168.5.0, and 192.168.10.0 and confirmed that the wireless devices on a VLAN get an IP address on the corresponding subnet.

I’ve been having some problems with the firewall setup, so I still have some items to get working:

The ER-X is a pretty advanced device for $50 and I’m looking forward to learning more about advanced networking topics as I tweak it. Just so long as my family can deal with the home network going down a lot as I make mistakes. 🙂