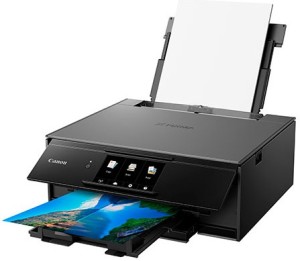 I went to print a color document on my Epson XP-410 printer the other day and, despite non-empty ink cartridges, got a print that was missing several colors. I ran the print head cleaning procedure multiple times, replaced ink cartridges, even manually cleaned the inside of the printer and could not get it to print cyan or magenta anymore. Epson support said I could send the seven year-old unit in for repair, and offered me a discount code for a newer model, but I decided it was time for a change. After my requisite online research, I selected the Canon PIXMA TS9120.

I had a few criteria for the new printer:

The TS9120 met the first three of those requirements. It uses six (yes, 6!) separate color ink cartridges: cyan, magenta, yellow, photo blue, and two blacks (pigment for plain paper, dye for photo paper). So, yeah, the long-term ink costs are probably going to be higher than the Epson. The dimensions are about 15x12x6, slightly larger than the Epson but still small enough to fit on the lower shelf of my printer cart (the laser printer is my main scanner too, so I don’t need to open the top of the PIXMA for copying or scanning). And finally, it has both wired and wireless networking options. I wasn’t able to find a small printer that loaded the ink from the front (more on that later).

The additional benefits that I liked:

I only need a color inkjet for photo printing and the occasional color document, so there are a lot of features the PIXMA has that I will probably never use: scanning and copying, Internet printing (in fact, I had to add a bunch of Canon domains to my Pi-Hole because I found the printer was constantly pinging out to them). I’m definitely going to try the optical disc printing (although truthfully I can’t recall the last time I actually burned a data DVD).

The TS9120 came with a sample pack of 4×6 glossy photo paper, so I used them to print a few borderless photos and they came out looking pretty great. I still need to try some larger prints, however. Ink usage is also something I’ll be keeping an eye on. After printing just the initial alignment page and a sample test page, the ink levels were already visibly lower (see screenshot below)! I might regret having a six cartridge printer. There are standard, XL, and XXL cartridges, which is crazy since they’re all the same size which means Canon is just putting less ink in the standard ones. Why is ink still so expensive?

When all buttoned up, the TS9120 is a perfect rectangular box (the paper cassette does stick out a bit when loaded). When printing, however, the front panel tilts up and the output tray pushes outward to catch the print job. You can set the PIXMA to automatically turn off after a set amount of time and when it does that, it can automatically retract the output tray (you can also gently push it back in and then flip down the front panel again).

Like I mentioned, I had the Epson on a lower shelf, which was a bit of a pain because it was a rear-loading printer and the rear tray stuck out the back of the printer cart. It was also troublesome when I had to change the ink cartridges because I had to remove the paper from the rear tray, collapse it, and then pull the printer forward out of the shelving compartment, balance it on my knee, and open the top to get the cartridges inside. That’s why I was hoping to find a new unit with front-loading cartridges, but alas the PIXMA still requires the top to be opened to replace the ink. But, that front-loading paper cassette is great! I can still use the expanding rear tray if I want to print an envelope or use the 4×6 glossy photo sheets, but for the most part I can just load all of the paper from the front now.

So far I’m happy with the new printer … but its new. 🙂 Let’s see how the next seven years go.