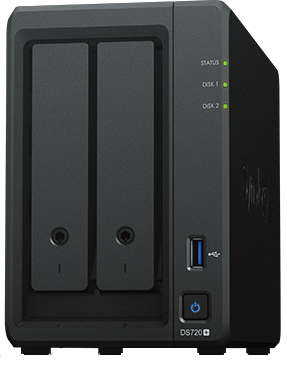 During my recent switch from LastPass to Vaultwarden I was planning on using Docker but then discovered my old (2014) Synology NAS didn’t have the CPU architecture to support it. I was already in the middle of one big winter break project, why not add another? Time for a NAS upgrade!

My DS214 started out with two 3TB drives, which I then upgraded to 6TB in 2018 and then 8TB in 2020 (after one of the 6TB drives started exhibiting bad sectors). I didn’t need a capacity increase again, just a hardware upgrade so I started looking at the newer 2-bay DiskStations. The end result was my purchasing the DiskStation DS720+.

While I was waiting for the new hardware to arrive, I started prepping for the drive migration. My plan was just to move the two Seagate Ironwolf 8TB drives from the DS214 to the DS720+. Most of Synology’s documentation seemed to confirm this would be a relatively simple operation but there were some confusing notes specifically around moving from DSM 6 to DSM 7 that could require a full backup/restore to preserve data. I didn’t want to lose anything (obviously) so I started a full backup using Hyper Backup and one of the spare 6TB drives I still had from the prior upgrade. Since I’m only at 45% capacity I knew the whole backup would fit on that single drive, what I didn’t think about was how long backing up 3.2TB to an external SATA drive over USB was going to take (37.5 hours for the first pass, then another hour for an incremental to catch all the changes over the past day and a half). 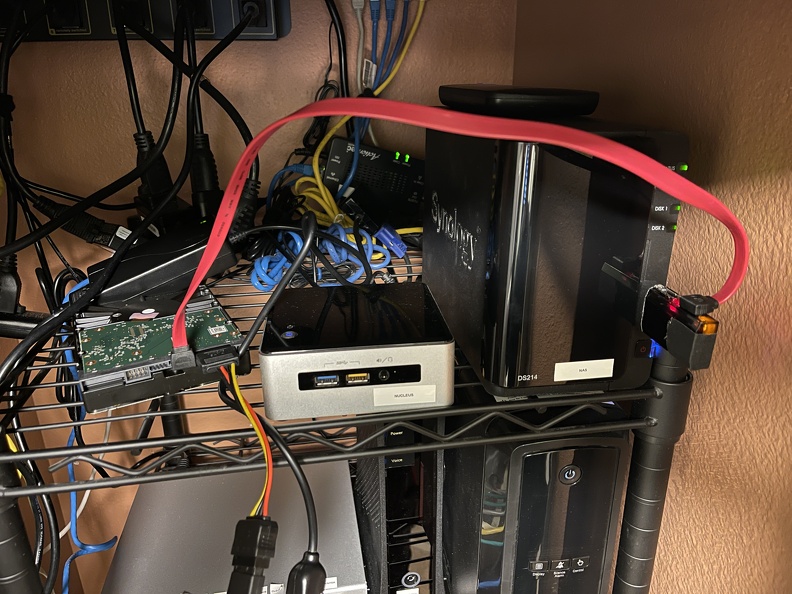 backing up the NAS

The new NAS arrived while the backup was still running so after installing a 4gb RAM chip (to bring it up to 6gb total) I just had to wait for the backup to complete (which was fine since I was still busy working on dropping LastPass like a hot potato). Once I had a good backup, I shut down the old NAS (after unmounting the shares from my Linux server), physically moved the drives into the new NAS, and then booted up the DS720+. Using the Synology Assistant, I confirmed the NAS showed a “migratable” status:

Clicking on that launched the Web Assistant in my browser, which correctly detected the source and destination hardware: 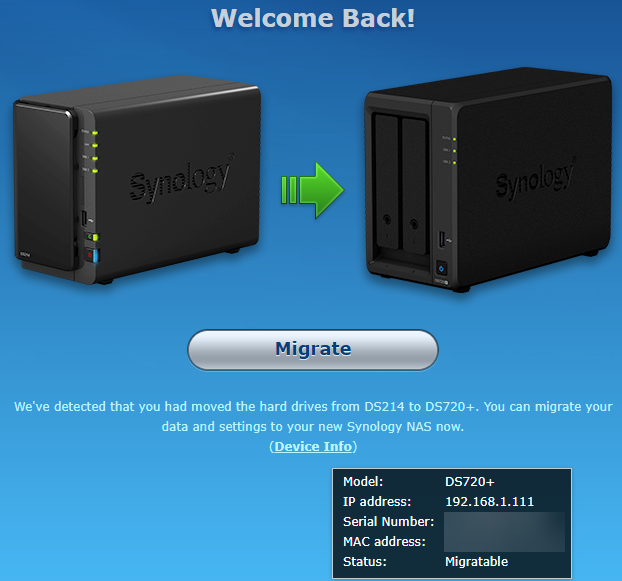 I chose the migration option:

And then let it update to the latest version of DSM 7 and reboot. After the reboot, it updated my installed packages (Cloud Sync, Hyper Backup, etc.) and then I was able to log in and do a restore of the system configuration. Success!

In my research I thought re-configuration of the packages would be required (so I had made screenshots of all the setup beforehand), but everything seemed to working and was just like I had it on the old NAS. I also confirmed my memory upgrade: 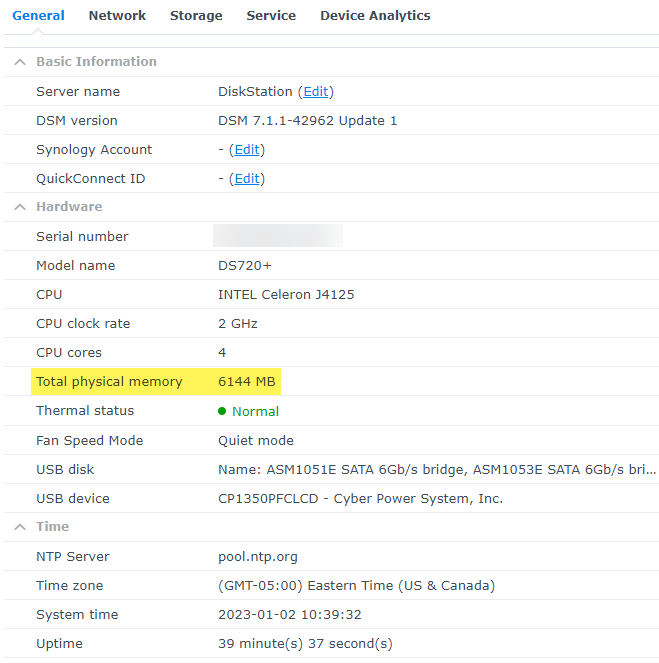 The total “downtime” for the swap was just under 45 minutes. I was able to re-mount the shares on the Linux server, access everything from my PC just like nothing had changed. Beautiful! Of course this went so smoothly because I had that full backup. 🙂

The DS720+ has two USB 3.2 ports, one front and one rear. I had an external SSD (for config backups) and a UPS (monitored via NUT on the Linux server) connected to the DS214 and still had a third USB port on the front (the one I used to connect the 6TB drive for the full backup). With one less port I had to route the UPS cable to the front port which wasn’t a big deal. Something new is two M.2 (NVMe) drive slots that can be used for cache acceleration (but I’m not using those currently). The new NAS also has two 1GbE network jacks, which I set up as a bonded connection in adaptive load balancing mode and then connected the second jack to an open port on my switch.

In my computer closet I use a lot of LED dimming stickers to limit the brightness of all those lights, but hey, in DSM 7 you can set the brightness level. Hard to see in this photo, but still a nice feature. 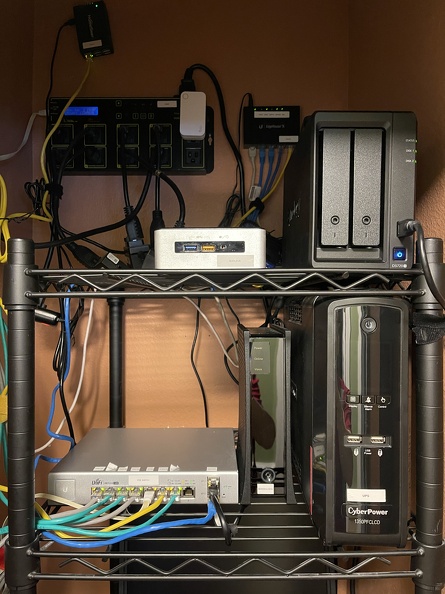 The main reason for the NAS upgrade was to be able to run Docker for my new Vaultwarden setup but I had completed that install using Docker on my Linux server while I was waiting for the DS720+ to arrive. I wasn’t quite ready to move that setup to the NAS but still wanted to experiment with Docker and take advantage of the newer hardware and beefier specs of the DiskStation. I ended up migrating my Plex install from the Linux server to the NAS which worked really well. Now instead of Plex running on the server and accessing the media on the NAS via SMB mounts, the Plex server is running directly on the NAS, eliminating a network hop and allowing for hardware-based transcoding. Then, to continue with my Docker experiment, I migrated my Tautulli setup from the Linux server to a Docker container on the NAS: 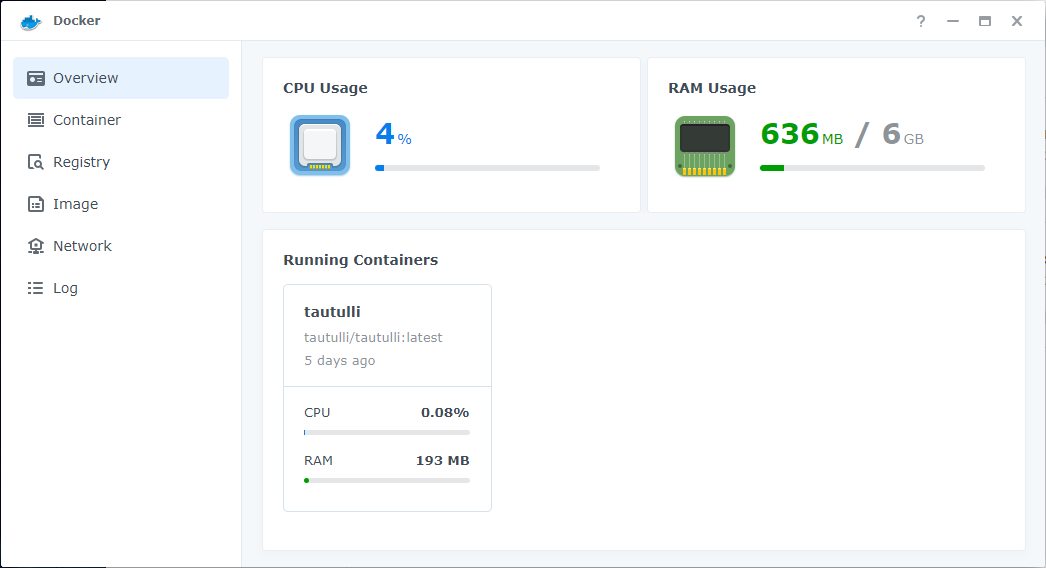 Like with my Docker Vaultwarden setup, the container can be destroyed, upgraded, and re-deployed without affecting any of the persisted data (which lives on another share on the NAS). Very cool. I still may consider moving the Vaultwarden container to the DS720+, but since I’ve got everything working well with the Apache reverse proxy, backups, etc. I’m hesitant to make any changes just yet (maybe in a few months once everything is settled and I need another project to work on).

I am extremely pleased with the new DiskStation. Synology continues to impress me with the quality of their hardware and software. I’m looking forward to playing around more with Docker and seeing what else I can run on the DS720+ instead of using it as just a file server.