Hey, just so you know ... this post is now about 5 years and 7 months old. Please keep that in mind as it very well may contain broken links and/or outdated information. 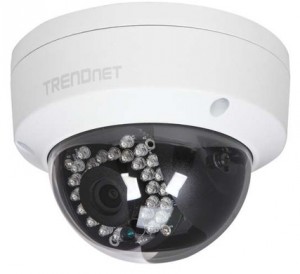 Now that the wireless network re-design was done, I wanted to replace my aging Foscam outdoor cameras with newer, HD models. Installing the Ubiquiti UniFi AP was my first introduction to power-over-ethernet and I decided to move to PoE (instead of wireless) cameras. I already had TRENDnet cameras in my current setup, along with TRENDnet switches, so I decided to stick with that brand and selected the TV-IP311PI outdoor cameras and TPE-TG44g PoE switch.

The TV-IP311PI is a small dome, outdoor, night vision, HD network camera. Despite the dome look, it’s a fixed-position camera: you have to manually adjust the horizontal and vertical position of the camera and it stays that way (no PTZ).  (update 09/15/2014: see comment below) I already had ethernet running to one location (the wireless had died in one Foscam), so it was easy to connect to the network (and power, thanks to PoE, see below).

The video quality (2048×1538 at highest quality) is excellent, as is the night vision, and the 70 degree horizontal viewing angle is wide enough for my needs. The camera comes with the TRENDnetVIEW Pro software (and can also be used with TRENDnet’s mobile apps), but I prefer to use ZoneMinder. It took a little research to determine what direct URL to use for the video feed (I’m using RTSP), and I had to ratchet down the resolution a bit to prevent CPU hogging by ZoneMinder’s motion detection analysis, but I’m very pleased with the final result. 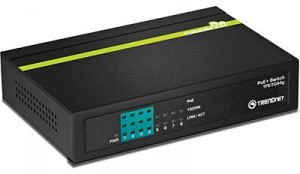 On the other side of the ethernet cable from the camera, the TRENDnet TPE-TG44g is an 8-port gigabit switch with 4 PoE+ ports. I simply replaced one of my existing TEG-S80g switches with the new one, pulled new CAT5e cable through the attic from the camera locations (one was already wired, but I was also replacing a wireless one), and connected them into the switch. I was a little disappointed that the switch doesn’t have any holes on the bottom for wall-mounting, but I guess they figure since it gets warmer than a regular switch it shouldn’t be hung vertically. Also, it requires a larger-than-average power brick (for a switch, anyway). If you don’t need gigabit, the TPE-S44 will save you about $40.