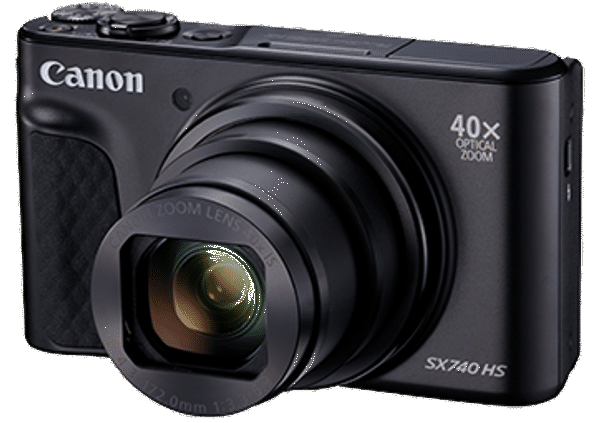 During our recent cruise to Hawaii, my three and a half year-old Canon PowerShot SX710 HS started having lens issues. Just what I needed in the middle of a 10-day trip to the most exotic location in the United States: a super-zoom camera that wouldn’t zoom. The lens would make a clicking noise as it extended and retracted, and sometimes just lock up, open, with a “lens error” displayed on screen. Luckily I had my iPhone 7 Plus and Olympus Stylus Tough TG-4 with me, but those aren’t super-zoom cameras.

I survived the rest of the trip (sometimes the camera worked, sometimes it didn’t) but the writing was on the wall: the SX710 needed to be replaced. Being a long-time Canon customer (since my first A70 back in 2003) and having liked the SX710, I selected the newer version Canon PowerShot SX740 HS as my new daily-use super-zoom camera.

The SX740 is a 20.3 megapixel camera (just like the SX710) that sports a 40x optical zoom (compared to the SX710’s 30x), Wi-Fi and Bluetooth capabilities, and shoots 4K video. It’s about half an ounce heavier than the SX710 even though the height and width dimensions are slightly smaller. It’s just a smidge thicker, though, as it has a 3″ LCD screen that can be flipped up 180 degrees to face the front of the camera when taking selfies (no more holding the camera at arm’s length not really sure what I’m shooting anymore).

The physical button layout is mostly the same except for the welcome change of moving the zoom-assist button from the right side of the camera body to the left rear side where it’s more easily accessible with a thumb. The mode selection dial also moved from the back left side of the case to the top. The new layout is close enough for my muscle memory with the SX710. The pop-up flash is still manual, so you still have to release it with the switch on the side before the camera will use it. There’s still no in-camera battery charging so you have to carry a little black brick with you (and once again, the battery form factor has changed from the SX710).

The camera works with Canon’s Camera Connect mobile app. You can connect the WiFi to an available access point, or have the camera broadcast its own SSID that you can then connect your phone to. This allows you to download images, use the phone as a remote trigger, or even directly upload to supported web services like Google Drive, Facebook, YouTube, Twitter, or Flickr (do people still use that?) through Canon’s slightly-better-than-the-last-time-I-tried-it Canon Image Gateway. I’m still a “pop out the SD card and download the images manually” type of guy, though, unless I need to get the photos on my phone right away for mobile posting. You can also use the app on your phone to geo-tag the photos since the camera does not have an internal GPS.

Recording 4K video (3840×2160@30fps) requires a fast SD card. The 16gb SDHC Class 10 card I was using in the SX710 would only record about 15 seconds of video before stopping with a “slow write speed” error. I picked up a Kingston Canvas React 64gb Class 10 UHS-I U3 (yeah, that’s a lot of acronyms to know) SDXC card for $18 on Amazon and that fixed the problem. Here are some video samples and comparisons I put together. It’s hard to see the exact difference in a YouTube video, but the 4K video definitely looks sharp. I still need to do some “real” recording and then run it through my editing software to see how the final results really look.

Since I just got back from a long vacation I haven’t had a chance to really put the SX740 through its paces in real-world photo situations, but will report back with any findings once I do.