Hey, just so you know ... this post is now about 7 years and 1 month old. Please keep that in mind as it very well may contain broken links and/or outdated information. 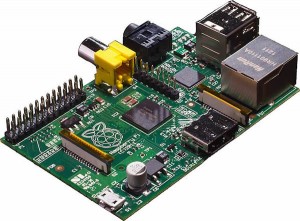 The Raspberry Pi is a credit card-sized ARM-based Linux computer that costs just $25. It’s intended to be used as an educational device and instantly appealed to my inner tinkerer (and gadget freak).

I ordered the Model B (256mb RAM, 2 USB ports, HDMI/composite video/audio jacks, and Ethernet) from Allied Electronics back in late September but ended up getting the newer revision with 512mb instead (nice!) by the time it arrived the first week of December. Considering my first Linux server was an old 486 with 16mb of RAM, the Model B’s 700MHz ARM1176JZFS CPU in a Broadcom SoC (system on a chip) is a powerhouse! Per the FAQ: “The graphics capabilities are roughly equivalent to Xbox 1 level of performance. Overall real world performance is something like a 300MHz Pentium 2, only with much, much swankier graphics.”

The community of hobbyists and DIYers that has sprung up around the Pi reminds me of the early days of Apple and the Homebrew Computer Club. For an example of this, check out MagPi, a free online magazine for Pi enthusiasts that contains code examples, sample projects, and other information related to this little computer.

In preparation for my Pi’s arrival, I had dug through my parts boxes and set aside some SD cards and a 5V micro USB power supply. I also downloaded a few OS images (like Raspbian and Arch ARM) to play with (one tip if you’re having problems writing images to SD cards, grab the SD Card Formatter!).

So now that I have my Pi, the question is: what do I really want to do with it? I’m no stranger to Linux and already have my media center needs pretty much covered with my TiVos (although I did check out RaspBMC, which is pretty cool) so I’m thinking something GPIO-related. There have already been a few sample projects in past issues of MagPi about this so it might be time to expand my electronics knowledge with some hands-on work or other projects. In the meantime, perhaps a Quake 3 Arena server for fragging family members over the holidays? 😀 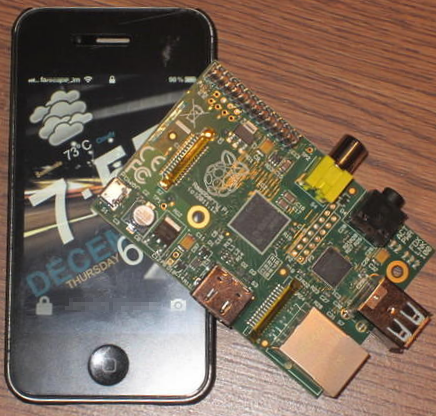