Hey, just so you know ... this post is now about 8 years and 7 months old. Please keep that in mind as it very well may contain broken links and/or outdated information. 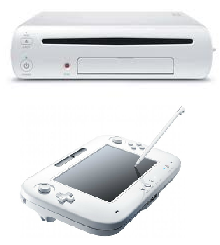 Today at E3, Nintendo announced their next generation game console, the Wii U. The console itself looks pretty much the same but boasts (presumably) increased specs, including HDMI for full HD output (no more 480p!).

The real news, though, was the new controller: along with the standard D-pad, buttons, and motion control it sports a 6.2″ color touchscreen (and stylus) and can stream games from the console to the screen (sound and all), no TV required. That’s a cool feature when Junior wants to play Mario Kart but Mom and Dad want to watch TV. I wonder, too, if that would make the Wii U a more portable entertainment system (think: in the car on road trips).

The Wii U will be backwards compatible with all Wii games and controllers, another smart step, similar to how the Wii can read GameCube discs.

What to say about the name? At first glance it looks like some sort of video game school. I can see where they’re going with the “we” (console) and “you” (controller), and everyone got used to saying “Wii” eventually, but now we’ll have to go through all of that again. Oh well.

Would I get one to replace my Wii? Probably not right away. The Wii U won’t be out until 2012 and the pricing has yet to be announced. Since I’m a casual gamer the lack of HD output hasn’t really bothered me and I’m sure the new controller is not going to be cheap. For playing Mario Kart online with my siblings, or Lego Harry Potter with my daughter, the current console works just fine.