Hey, just so you know ... this post is now about 7 years and 9 months old. Please keep that in mind as it very well may contain broken links and/or outdated information.

[ I apologize for using the term “rabbit hole” three posts in a row! -windracer ]

Apparently I have a thing for doing homebrew stuff in April: almost exactly two years after softmodding my Wii so I could load my games from a USB hard drive instead of discs, I found myself wondering if I could do the same for Virtual Console and WiiWare content. Well, of course you can! The path can be confusing and frustrating, but the destination … well, it’s a cool destination.

I’ve been very happy with my USBLoader GX setup, but it occurred to me that since my Wii always boots directly into the loader (thanks to Priiloader), I was neglecting my VC and WiiWare games! A quick Google search later and I found this WiiHacks guide for creating ISO forwarders to run that content like a disc-based game. While the guide itself is very clear and detailed, it still took me a few hours to wrap my head around the process and get everything functional.

Since it’d been a while since I last touched my homebrew setup, I first:

Then I followed the steps in the guide to make a backup of my Wii’s NAND, extracted it, and put it on a separate partition of my USB hard drive. Next I created the ISO forwarders for my Virtual Console and WiiWare games, and added them to the loader. The snags I ran into were:

After all of that, though, check it out! 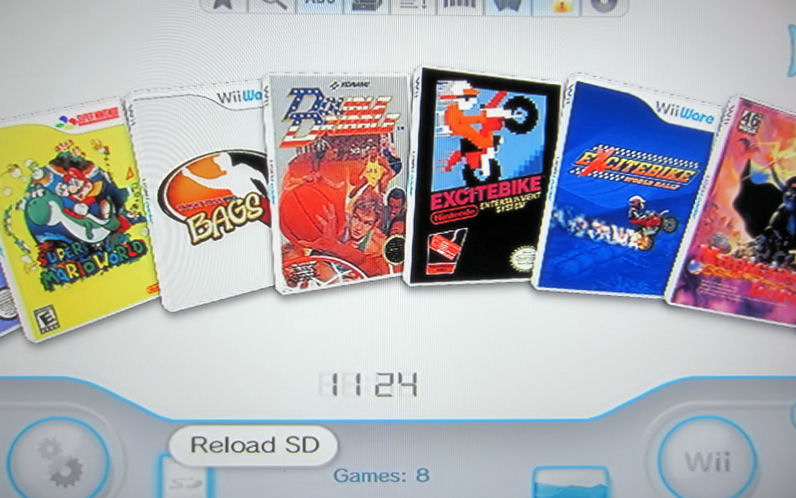 Just having the game icons in the loader doesn’t mean they will actually run, however, so next I had to test each one. Only two of my games didn’t work right away: Magician Lord and Target Toss Pro: Bags.

Magician Lord, my only Neo-Geo VC game, would load but not show any video. The game was still running, I could hear the background music and even start and “play” the game, I just couldn’t see anything. If I pressed the Home button on my Wii remote, the video would appear behind the Wii system buttons. The issue turned out to be the need for interlaced mode. Following the instructions, I pressed  Z+A+2 while in the Operations Guide for the game and that fixed it!

But getting Bags to work is when the rabbit hole appeared … and I fell in. After hours of messing around with different IOS base version and slot combinations, loader settings, and reading forum threads, I could not (and still can’t) get this game to run from the extracted NAND through the loader. I’d get the health and safety screen, and then the Incredible Technologies and N-Space “loading” screens, and then just a black screen and the Wii would hang. I even tried Mighty Channels and Triiforce, but the game wouldn’t work through those either. It didn’t help that Bags is apparently not a very popular WiiWare title: I could only find one mention of it with regards to running through a loader with no details. Finally I just gave up before I screwed up the other 99.9% of my games that do work. Update: I got it working!