Hey, just so you know ... this post is now about 8 years and 10 months old. Please keep that in mind as it very well may contain broken links and/or outdated information.

Day Three of our annual Spring Training Trip: practice, an afternoon game, and then dinner at the Rooste!

8:00am: the day started out with our new tradition, Saturday morning breakfast at the Black Bear Diner in Goodyear.

9:30am: we’re at the Player Development Complex watching the Indians’ morning practice. 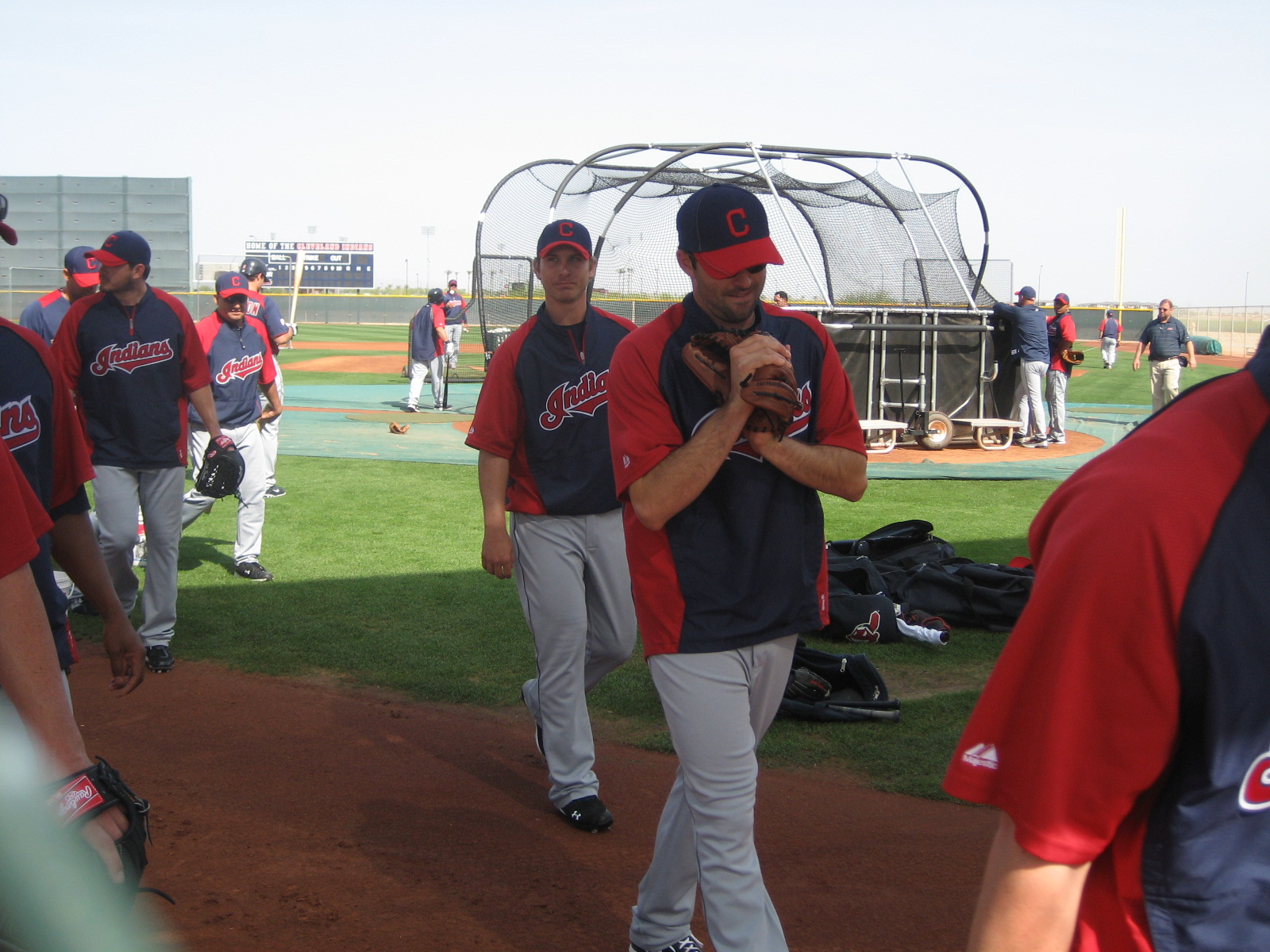 We saw Shin-Soo Choo go by who was looking pretty good considering he got beaned in the head last night. We spent some time talking to Steve, one of the facilities guys at the complex (he claimed he remembered us from last year, which we doubted).

And what is it with good karma this trip? While we were in the parking lot, an elderly gentleman drove up in a car with Iowa license plates that read CLE-IND (pretty cool). He asked us if we had tickets to today’s game, to which we replied we did. He said he had two tickets he was trying to give away because he was going to the air show at nearby Luke Air Force Base. We told him we already had tickets but we were sure he could find someone else here at the complex. A few minutes later he came walking by again and said he couldn’t find anyone so he just wanted to give them to us to sell or use or whatever. Nice!

11:47am: we’re over in Tempe. Is it intentionally ironic that the Angels play in Diablo Stadium? 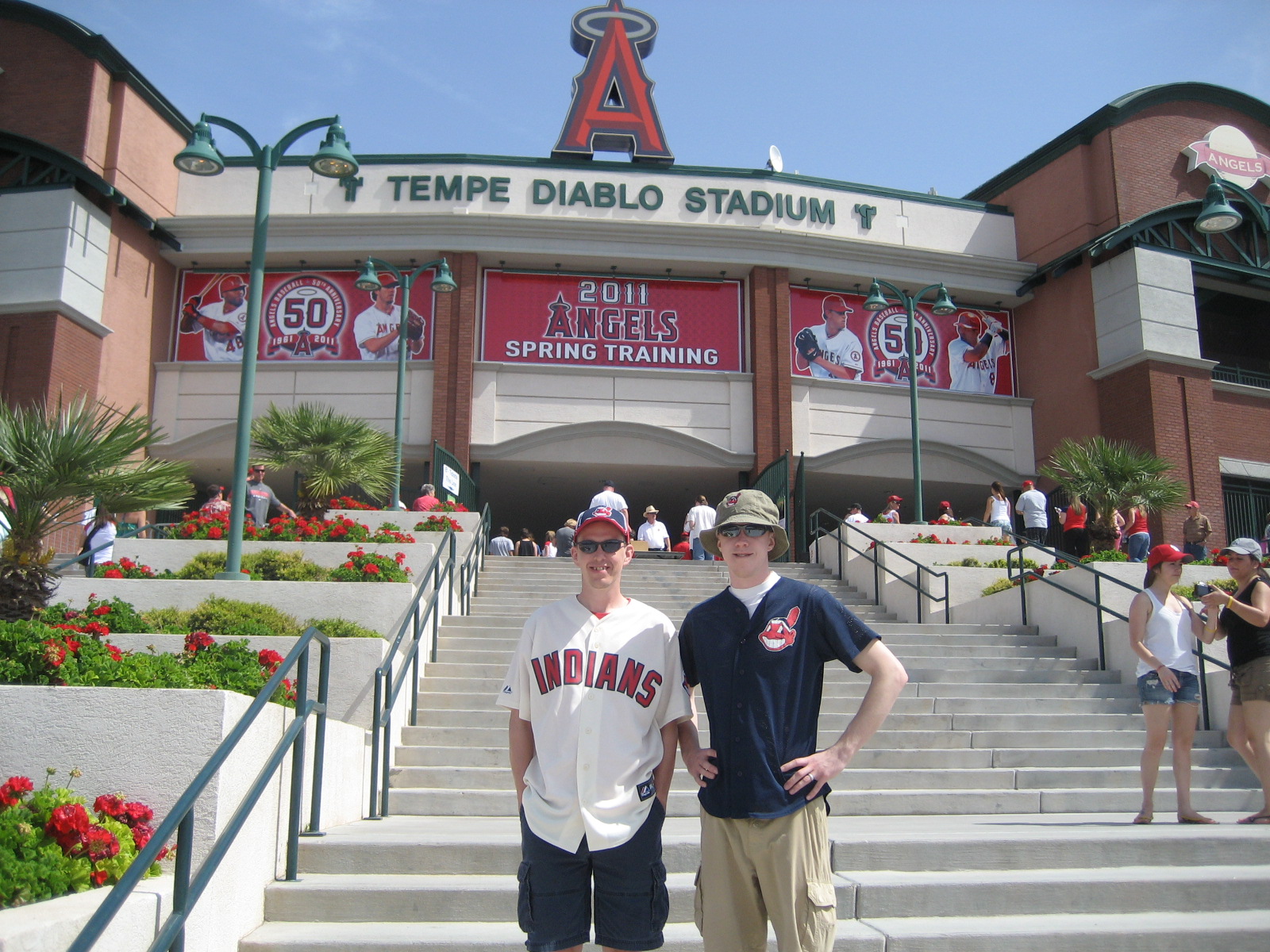 We checked out our seats and they’re already in the shade, nice! 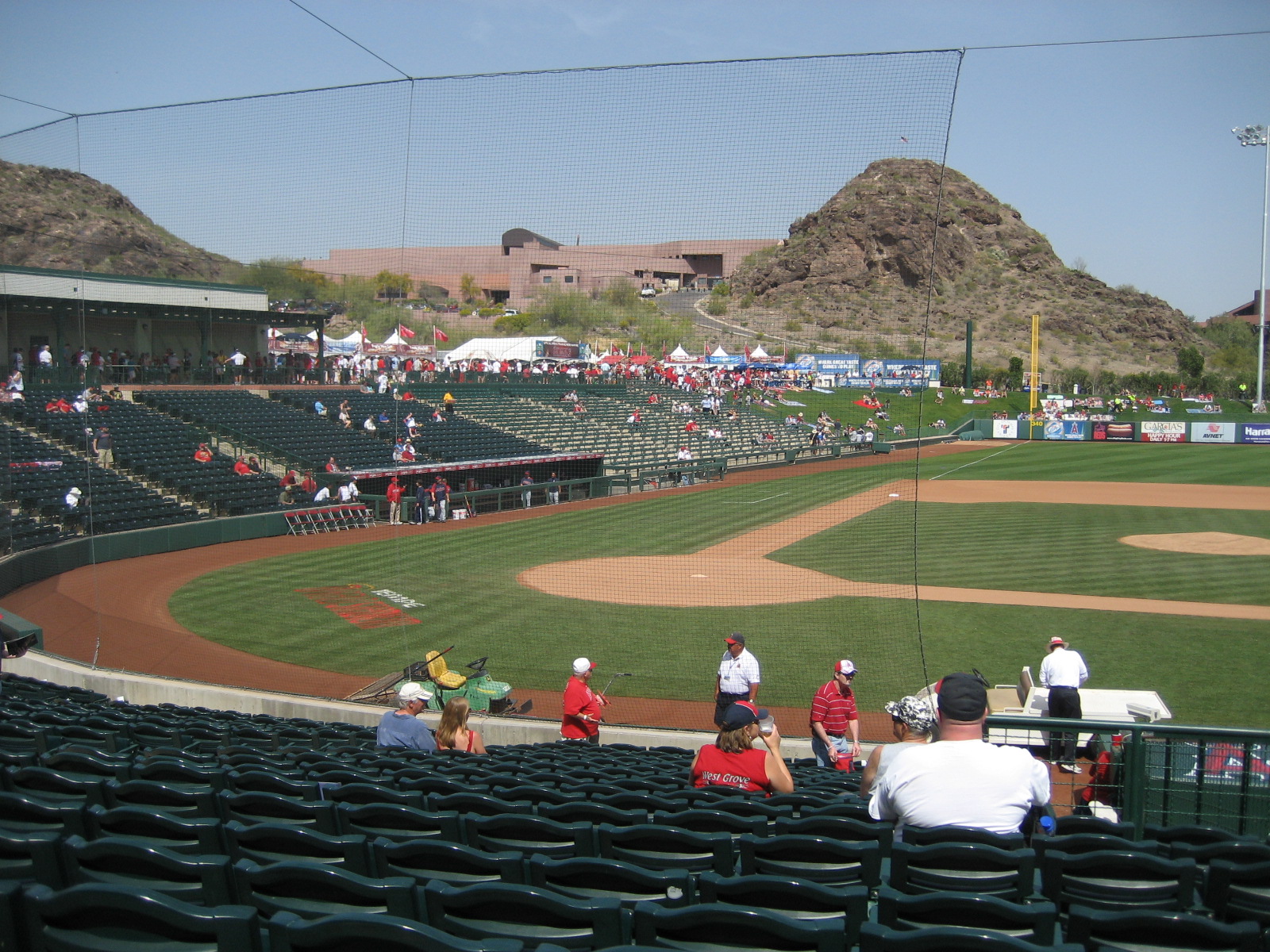 1:00pm: the National Anthem was played by Jim “Mr. Trumpet” Doepke, who is on a mission to play the anthem in every major league ballpark as part of his Anthem Across America program. 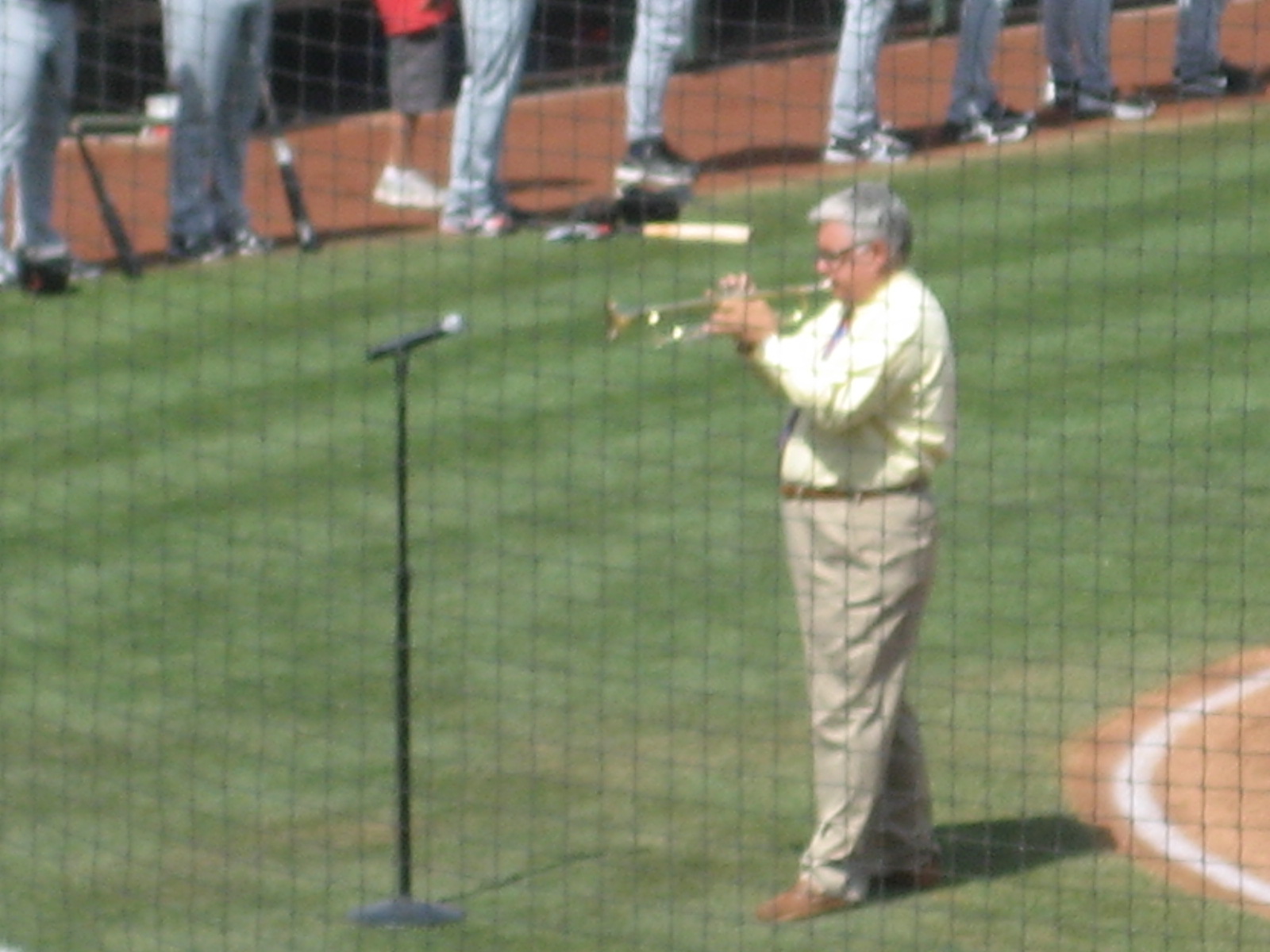 4:30pm: another slug-fest. This one went back and forth but the Indians finally pulled ahead and won the game 10-7. This was the first away game victory we’ve seen by the Tribe in our three years of coming out here! Today’s attendance: 8,735. We’ve got dinner reservations in an hour so we’ve got to quickly get to our new hotel, check in, freshen up, and get to the restaurant.

6:15pm: the one reservation I didn’t confirm before the trip turns out to be the one that’s gone missing. We got to Rustler’s Rooste in time for our 5:30 reservation and there was no record of us. Luckily the Rooste opens at 5:00 so it wasn’t too busy yet and they found us a table outside on the patio. It seems like every time we come here there’s some sort party or reception going on, and today was no exception. The food was great (and plentiful) as usual. 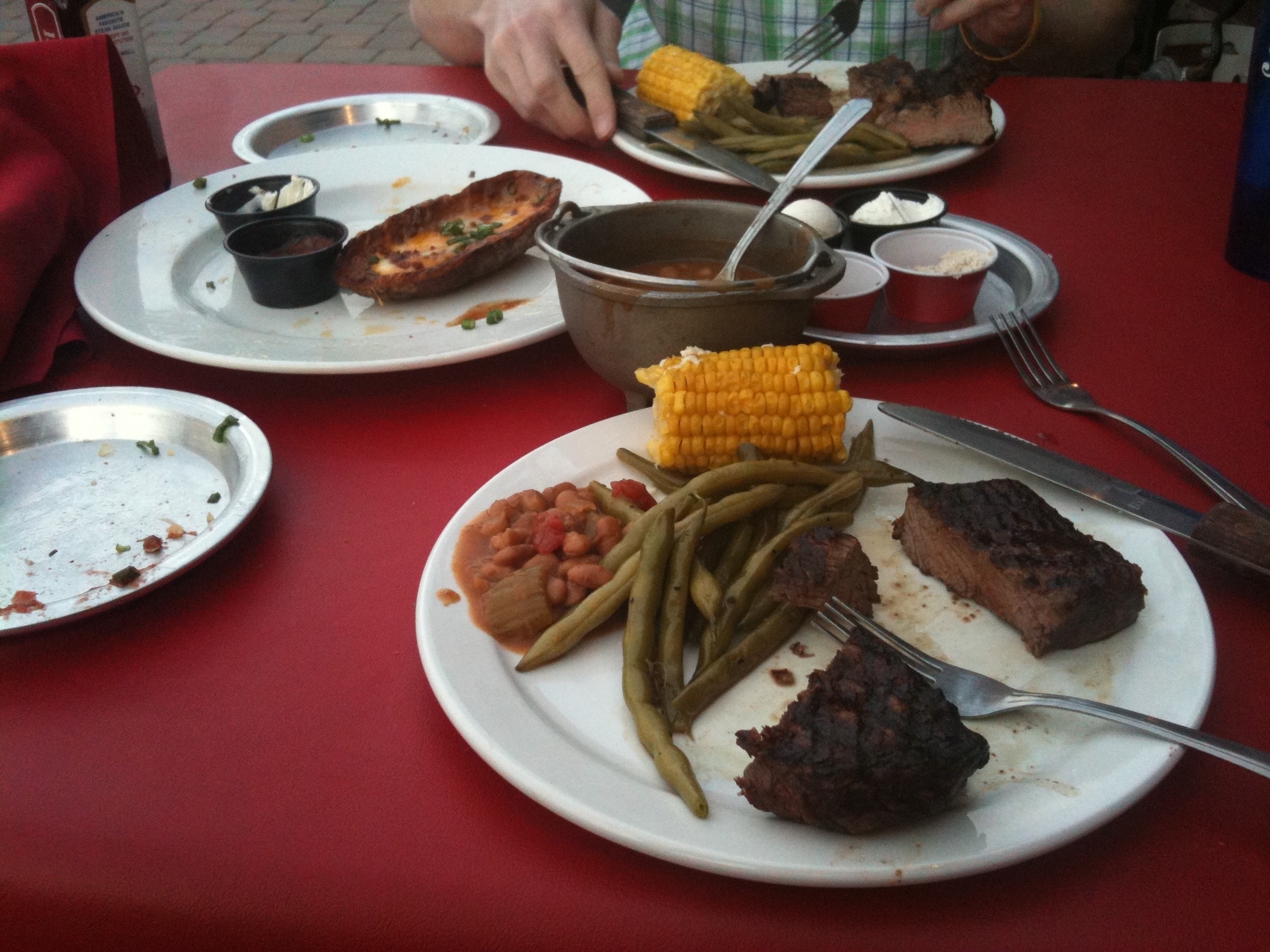 Dinner was fast, but that’s okay because tonight we’ve got to re-organize and pack for our flights home tomorrow. It’s going to be another early start.