Hey, just so you know ... this post is now about 11 years and 1 month old. Please keep that in mind as it very well may contain broken links and/or outdated information.

It may be a while (if ever) before I get a Palm Pre, especially since Sprint has it exclusively for 2009. However, I don’t have to wait for the webOS experience.

TealPoint software has released TealOS, an amazing piece of programming that duplicates the look-and-feel of webOS on the current Palm handhelds. Here’s a screenshot of it running on my Treo 680: 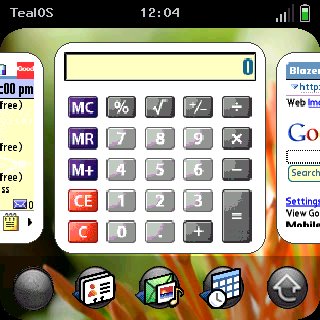 As you can see it gives you the card interface, where “running” applications appear as a scrolling list of cards on the home screen. You can use your finger to swipe the cards left and right and then tap on the one you want to “launch” (bring to the foreground). Now, PalmOS is not a true multi-tasking operating system so what TealOS is really doing is re-launching the application for you. Thus, I’ve found that the screenshots on the cards are not always accurate. If you’re not on the home screen, you can switch cards by swiping your finger along the bottom of the screen from either corner. To remove cards from the home screen list, just swipe them up and off. It’s pretty cool!

They’ve also included the “wave menu” where you swipe your finger up from the bottom of the screen to bring up a moving app menu for quick launching. My screen capture software (Snap) wasn’t able to capture the wave menu in action, but you can see shots of it on Engadget.

Underneath the pretty interface it’s still PalmOS, of course, so all of your existing apps look the same. Beware: after using TealOS for a while, those “old” apps start to look pretty tired and dated. Another side effect: more fingerprint smears on the screen. 🙂

I’m a long-time user of some of TealPoint’s other applications, mainly TealAuto and TealBackup. After playing with TealOS for a little while, I’ll have to decide if it’s worth the $15 for the pre-Pre experience.