Hey, just so you know ... this post is now about 3 years and 11 months old. Please keep that in mind as it very well may contain broken links and/or outdated information. 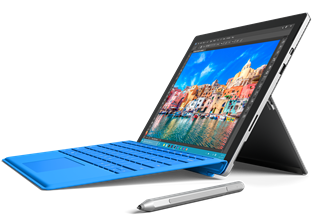 At work we’ve been using Microsoft’s Surface Pro since its original release and it has been our standard issue laptop since last year, starting with the Surface Pro 3. Moving forward, we’ve starting deploying the latest Surface Pro 4 with Windows 10. I’ve been using the SP4 for the past week as my primary machine in the office and other than some obvious hardware enhancements and some cool new features, it’s pretty much the same as the SP3 (and in fact, this post will pretty much be the same as the one I wrote back then).

Hardware-wise, the SP4 is almost identical to the SP3. It’s every so slightly larger in physical dimensions and there are a few changes:

The kickstand, power connector, magnetic Surface connector (for the keyboard), and other ports (one USB 3.0, mini DisplayPort, and audio jack) are all the same as the SP3.

As for the internals, my model has the 2.2GHz Intel Core i7 Skylake processor, 8gb RAM, and a 256gb SSD. The fan can still get loud and the back case can still get pretty hot under high CPU load.

With the release of the Suface Pro 4 (and Surface Book), Microsoft has dropped the snap-in docking station design in favor of what is basically old school-style port replicator called the Surface Dock. I call it a brick, but it’s really two bricks: the traditional AC power brick that plugs into the wall and stays under your desk; and the dock brick that goes on your desk, contains all of the ports, and connects to your Surface Pro via the power connector on the right side.

The Dock gives you four USB ports (two on the front, two on the back), gigabit ethernet and audio jacks, and two mini DisplayPorts. The second DisplayPort is a welcome addition as now I don’t have to use a USB display adapter to power my second monitor at work.

Since the Dock just connects via the power slot, it’s very easy to undock and go, even one-handed (the older docking station required two hands to slide open before removing the tablet). Another advantage is that you can use the kickstand on the Surface Pro to adjust the viewing angle even when “docked” (the older dockstation had a fixed angle). The Dock could even be considered “portable” for a trip, although the two bricks together are pretty heavy.

The updated Surface Pen is longer and slightly heavier than the one that came with the Surface Pro 3. The two separate buttons have been replaced by a single button and the “eraser” is now an actual eraser (in OneNote, for example) plus it’s still a button. I apparently wasn’t the only person confused by the inclusion of a sticky fabric pen loop and wished the pen was magnetic: the SP4 pen has a flat edge for it to magnetically connect pretty securely to the side of the table (that flat edge also contains the single button).

Unfortunately, I don’t use the pen as much as I used to. Once I figured out that typing my notes into OneNote was easier than writing them, I stopped using the pen.

The new Touch ID Type cover uses the same connector as previous Surface Pro keyboards and is backwards compatible with the Surface Pro 3. It has a thinner bezel, which allows for better key spacing/travel and is pretty nice to touch type on. The Print Screen and Insert keys have also made a comeback!

The fingerprint reader to the right of the larger, updated touchpad can be used in conjunction with Windows Hello for quick logins (side note: I love the facial recognition feature … my Surface Pro 4 logs me in as soon as I sit down in front of it).

Glare and reflections on the screen are still terrible (I’ve already ordered a matte screen protector). As with the SP3, the adjustable kickstand can help with this, but the overhead lighting in the office still turns the shiny black areas of the screen bezel into a distracting mirror.

The SP4 obviously comes with Microsoft’s latest operating system, Windows 10. I’ve been using Windows 10 since the early tech previews and am really happy with it. Everything seems to work extremely well on the Surface Pro 4. Not much else I can say about it.

So I’ve only been using the SP4/Surface Dock as my primary work setup for a week, but it was an easy transition from my Surface Pro 3/docking station configuration (installing all of my software and personalizing the setup took the longest). I’ll update this post with any additional findings I come across in the next few weeks.