Hey, just so you know ... this post is now about 10 years and 4 months old. Please keep that in mind as it very well may contain broken links and/or outdated information.

The plan was to get to Animal Kingdom close to opening time (9am) this morning, so we had breakfast in our room and then walked over to the bus stop at the Contemporary. The last time were we at Animal Kingdom was back in 2007, so we were looking forward to checking out the Asia area.

I love roller coasters, so I had to ride Expedition Everest first. 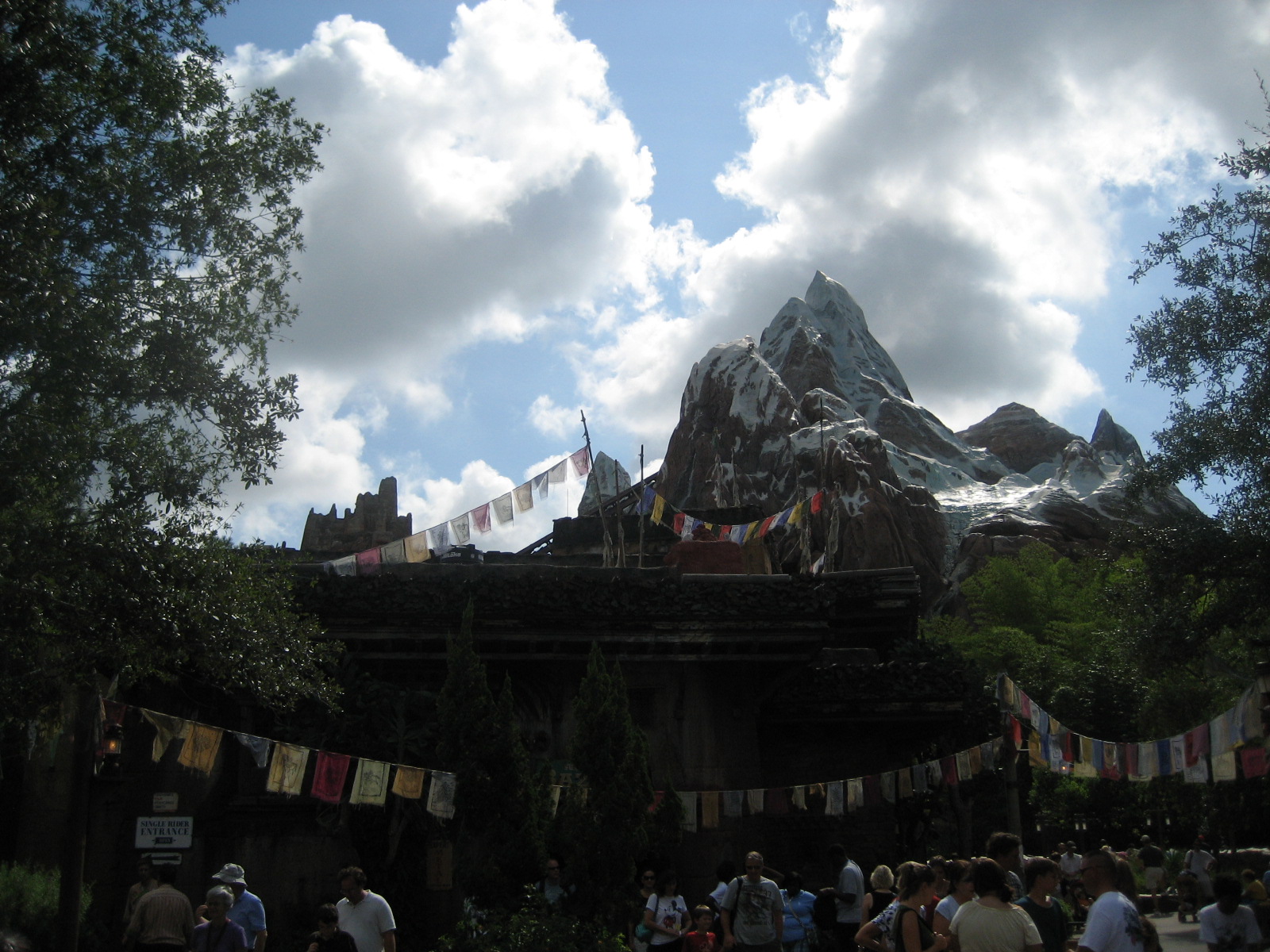 Surprisingly, my wife and daughter came with me, since the standby wait time was only 5 minutes (a benefit of being there early). It’s a great coaster! It goes through dark caverns, it’s fast, and even goes backwards … I loved it! My daughter thought it was “ok” even though she kept her eyes closed the entire time (there are some scary parts that involve the Yeti). After that thrill, we went down the path to the Kali River Rapids and got totally drenched … twice. My daughter really loved that ride, so we had to go on it again at her insistence (no lines so we walked on both times). I swear my clothes were still wet at lunchtime hours later, but at least it kept me cool in the heat of the day. 😉

As we started to dry off, we walked through the Maharajah Jungle Trek to see dragons, bats, and tigers. Most of the animals were apparently still sleeping though, because we only saw one tiger (sleeping in some tall grass, I almost missed him). I did catch this huge bat doing his best Dark Knight impression, though: 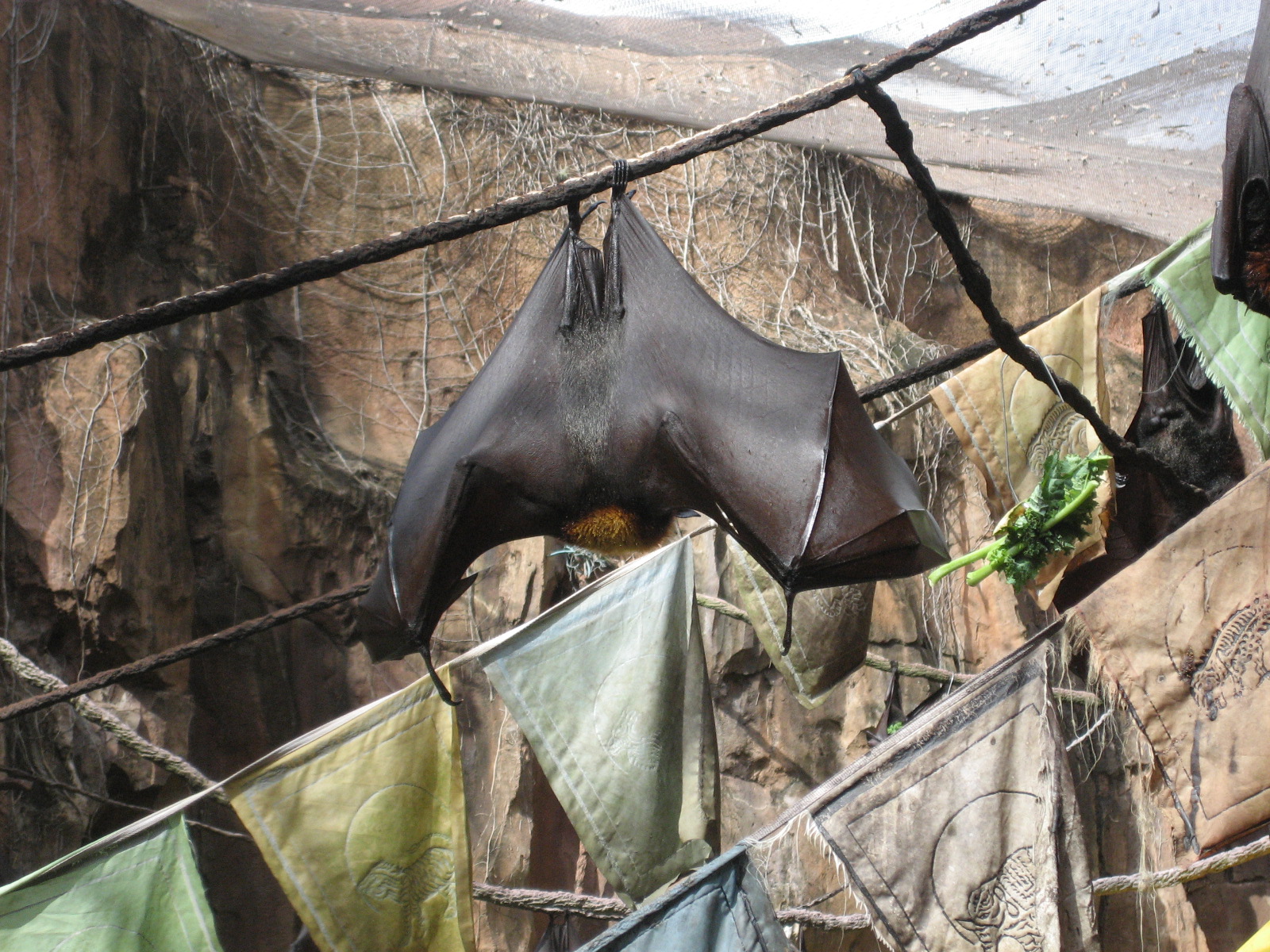 We had 2:00 lunch reservations over at Epcot, so we walked back through DinoLand USA (where my daughter did the scavenger hunt at the Boneyard) and then went back to the bus station.

At Epcot, we stopped into Innovations again, this time to register for the Kim Possible World Showcase Adventure. My wife and I love the countries at Epcot (especially the food!), but my daughter finds them boring. The Kim Possible adventure is the perfect family solution! The kids get a “communicator” which is basically an old LG flip phone. The screen plays video messages from the Kim Possible characters and sends you on a hunt in the various countries around the World Showcase to track down and stop the criminal masterminds. The communicator can be used to “activate” clues in the countries. It’s really slick. For example, our first “mission” took us to France, where we had to find a bookstore. Once in front of the bookstore, my daughter used the communicator to activate a fingerprint scanner. In the window of this bookstore there in France, a laser scanned the books and showed a fingerprint. This led us to another clue, and another activation. I was really impressed with how it was put together, all of these “clues” hidden in plain sight waiting to be activated by the presence of one of these mobile phones. One small drawback was that there were a lot of kids (and adults) running around with these communicators, so you kept hearing the sound effects and voices everywhere. It was hard not to spoil some of the locations that way. Once you complete the mission, you have the option of accepting another one which sends you to another country. When you’re done, the communicator directs you to a drop box to return the phone. This was a great way to keep my daughter interested as we walked around the World Showcase … kudos to Disney for that!

At 2pm we were at the Nine Dragons restaurant in China for lunch, which was good, but wasn’t great enough to earn a spot on our “favorite Epcot restaurants” list. We enjoyed a little more of the World Showcase after lunch and then took one of the Friendship ferry boats from the International Gateway (near France) over to Hollywood Studios.

Down Hollywood Boulevard we snagged FastPasses for the Rockin’ Roller Coaster, but they weren’t until 7:20 so we had a while to do some other things. My daughter and I went on Star Tours (a personal favorite, even though it’s old and somewhat dated) and eventually we made it over to the American Idol Experience and had front row seats. By the time we got out of there it was apparent we were going to get another mid-afternoon rainstorm, so we ducked into the Prince Caspian: Chronicles of Narnia walk-thru and avoided most of the rain. After dinner, we rode my favorite Walt Disney ride: Aerosmith’s Rockin’ Roller Coaster. 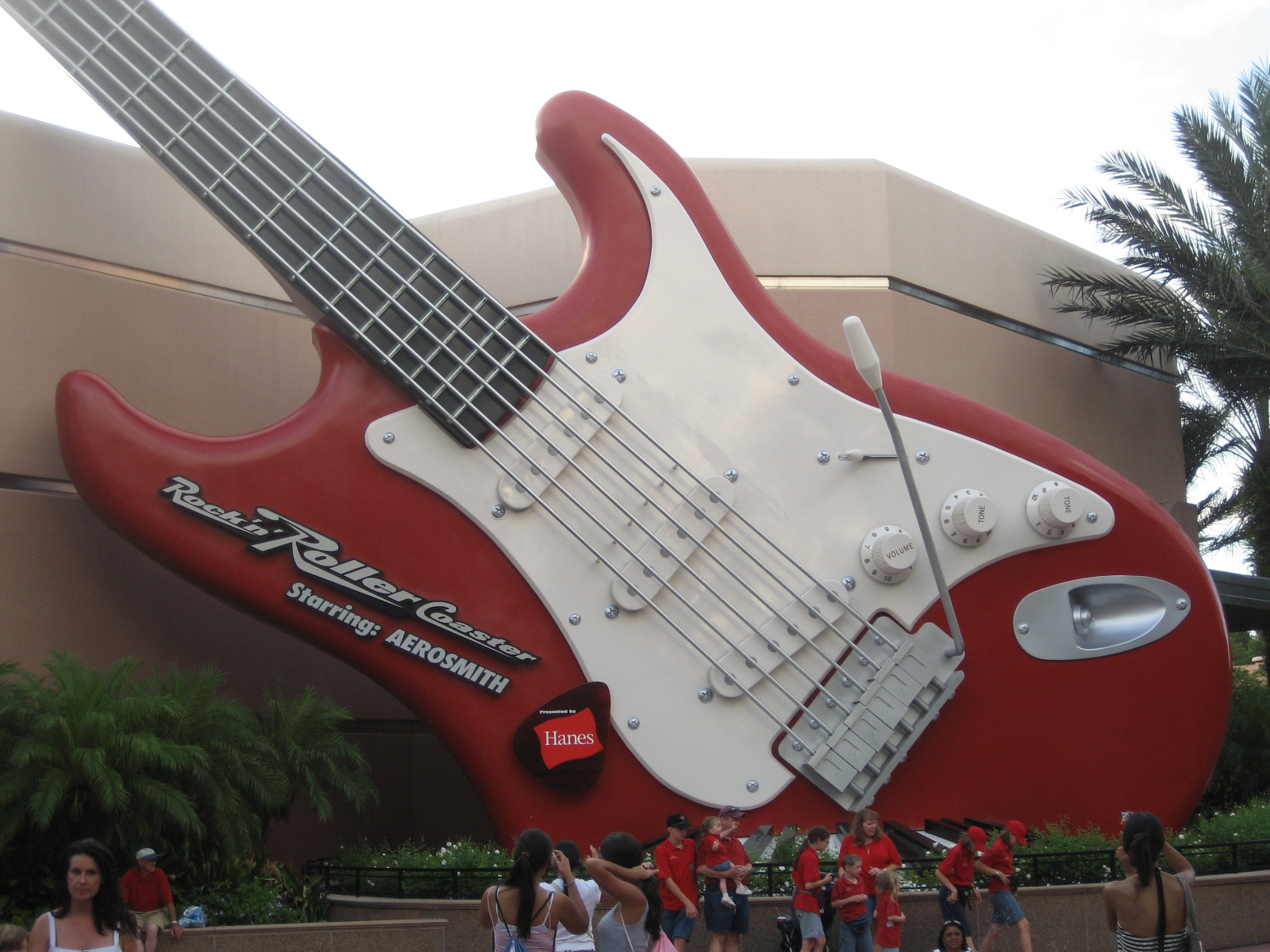 I love the loud music, the speed, and especially the launch (0 to 60 in 2.8 seconds!). This was my daughter’s first upside-down roller coaster experience … and she hated it. Oh well. I don’t think she minded the loops, or the dark (she did open her eyes a few times because she was able to describe some of the scenery) but she didn’t like how it banged her head around against the harness.

Immediately after getting out of the ride, we grabbed some ice cream and then headed into the Hollywood Hills Amphitheater for “Fantasmic.” This was another Disney show we hadn’t seen yet … we tried last year but were turned away because the park had closed, which was disappointing. Well, it was worth the wait because it’s an incredible show.

It took us a long time to get out of the theater due to the massive number of people, but eventually we threaded our way through the crowds and back to the bus station. We made it back to the hotel to catch the Magic Kingdom fireworks from our room for the third night in a row. Sweet.

Too bad we have to go home tomorrow …