A few weeks ago we upgraded our home security system and added ADT’s Pulse service. In addition to the remote security features (such as being able to monitor, arm, and disarm the system from a browser or an app on my iPhone), Pulse also introduced us to home automation via Z-Wave devices.

The heart of Pulse is the iHub, a WiFi and Z-Wave router that connects the ADT system to the internet.

The ADT technicians installed the iHub in my computer closet near my cable modem and existing router. Then they fished a serial cable through the attic to the location of the alarm panel equipment and finally connected the iHub to my router via a Cat-5 cable.

The WiFi side of the iHub is encrypted with WPA2 and used for any wireless cameras you install with the system. Unfortunately, ADT only supports one model of camera, the RC8021, which has no night-vision or PTZ features. Plus, you can’t just buy one from any retailer, only from ADT (due to customized firmware). My existing camera setup is a lot more extensive and capable so there’s really no need for me to use the ADT one that the installers brought other than it ties into the security system and mine can’t. Another annoying thing about the iHub wireless is that it broadcasts its SSID as “iHub_<serial number>.” There isn’t a customer-facing web configuration page available on the iHub and no one at ADT seems to know if this can be changed or hidden. Ideally, since I’m not using the WiFi features of the iHub, I’d prefer to turn it off altogether.

The real focus of this post though is the Z-Wave side of the iHub. Z-Wave uses the 900MHz range of the RF spectrum (so it doesn’t interfere with WiFi and other devices in the more crowded 2.4GHz band) and was designed with home automation in mind. Z-Wave devices form a mesh network to talk to each other and the iHub which basically means even if one device is out-of-range of the iHub, it can still send/receive commands by communicating through the other Z-Wave devices that it is in range of.

My initial ADT install came with a single appliance/lamp module but since then I’ve installed two dimmer switches and two outlets and also added two outdoor plugs (for the Christmas lights and landscape lighting) and another lamp module. Adding a device to the existing network is pretty simple: on the Pulse web site you select the device type being added which puts the iHub in discovery mode for 45 seconds. Then you press the “pairing” button (usually the on/off switch) on the Z-Wave device and it’s added to the network. Even though Z-Wave is an industry standard, ADT only supports certain makes/models (like with the WiFi cameras) so I went with the GE devices, all readily available from Amazon.

I got to experience the mesh network benefit of Z-Wave first hand during my rollout. Unlike lamp modules which plug into an outlet so they can be near the iHub during pairing, one electrical outlet and one dimmer switch I installed were too far away to be initially paired. To work around this I purchased the GE 45601 Z-Wave remote control, which could be paired with the iHub to be used as an inclusion controller. Basically, once the remote was part of my Z-Wave network I was able to pair the far devices (the outlet and switch) to the remote, which then relayed the pairing to the iHub when I brought it back into range. Then after refreshing the Z-Wave network, the other devices in the house were able to “see” and route to those further devices and include them in the network. Pretty sweet! Another benefit of having the inclusion controller is that it allows for advanced programming of the GE Z-Wave devices. By changing the values stored in registers you can control, for example, the speed of dimming, or even turn off the annoying bright blue LED with the device is off (nice for a switch in a common area, but annoying in a bedroom at night).

Once the mesh network was in place I started building my home automation schedule on the ADT Pulse web site. You can create recurring schedules (turn on the family room lamp every Monday and Thursday at 6pm and turn it off at 10pm) or automations (when the back door is opened, turn on the rear landscape lighting). Since my Z-Wave network is integrated with the security system I also have the option of only triggering events when the system is in a certain state (i.e., armed) or when system events happen (like a burglar alarm). I have found some complex scenarios you can’t create through Pulse, though, such as combining the alarm status and time of day (ex. if the alarm goes off after 9pm, turn on the inside lights). Also, you can’t set schedules or automations as inactive so if you have a schedule for when you’re away on vacation, you’ll have to delete those events when you’re back from your trip and then re-create them for your next vacation (you can work around this now with the recently added Modes feature, however).

In addition to controlling my Z-Wave network from the Pulse web site, I can also control the devices from the ADT Pulse app on my iPhone. Simple rocker switches allow me to turn lights on or off, and even control the dimmer settings: 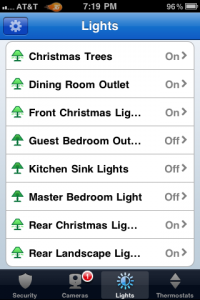 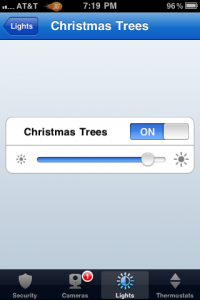 In conclusion, I’m pretty happy with Z-Wave and the automation it’s allowed me to add to my home. I’ll be sure to add updates to the comments on this post as I learn more or run into problems.

Update 05/08/2013: it’s been a while since I expanded my Z-Wave network but I finally added a thermostat, the Honeywell TH8320ZW. Despite this particular model not being listed on ADT’s site, I had no problems pairing it. It shows up as an “UNSUPPORTED Z-Wave Thermostat” on the web site, but everything seems to work except for the ability to put the fan into Circ mode (you can only specify Auto or On). 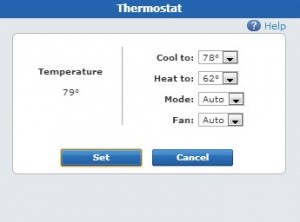 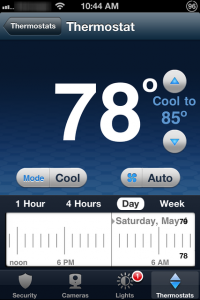 The thermostat is programmable, so you can set different temperatures, fan settings, and modes for four separate time-frames (wake, leave, return, sleep) on each day of the week. Before installing the TH8320ZW I had the Honeywell TH8321U (which was pretty much the exact same thermostat except for Z-Wave) so I just duplicated my current schedule. I could program the schedule into Pulse instead (and disable the thermostat’s built-in programming) but haven’t gotten around to it yet. The drawback (plus?) to this approach is that if I change the temperature through Pulse, the thermostat will hold at that temp and not change when the next scheduled program becomes active. The screen shows “temporary hold” but in my limited testing it seems to be a “permanent hold.” If I did my scheduling through Pulse, I’m guessing my “temporary hold” would be overridden by the next scheduled Pulse automation. I haven’t decided which way I want to go on this yet.