[ I’ve been slowly (hardly?) working on this post for the past few weeks, but now that we’re stuck at home waiting for Hurricane Ian to arrive I figured I should finally get it done. ] 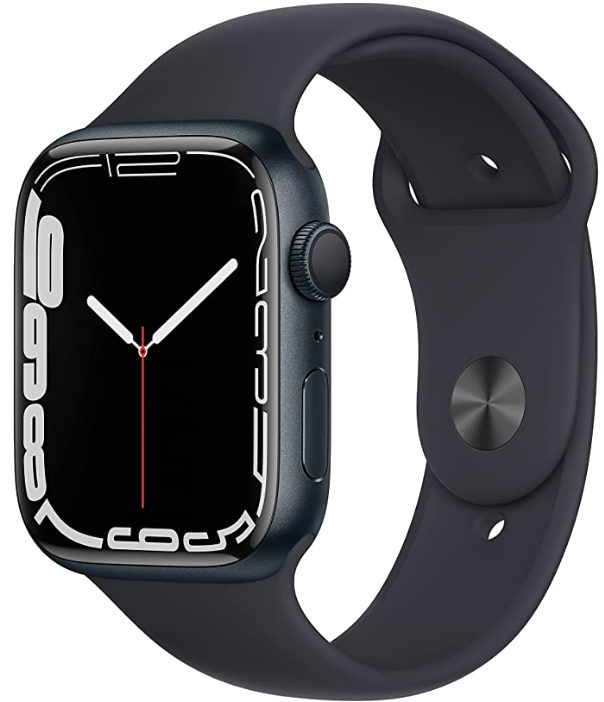 I’m a long-time user of fitness tracker tech: I got my first Fitbit in 2014 (after cancelling my original pre-order in 2009), followed by the Charge 2 and Charge 4. There was a brief time when my daughter had a Charge before she just stopped wearing watches altogether. My wife, on the other hand, went through a Fitbit Flex and Alta before I got her an Apple Watch (Series 3) in back 2018 (which she still has a loves). Honestly, with all of the other Apple devices in our home, I’m surprised it took this long for me to decide to switch and back on Father’s Day (two years after getting my Charge 4), I became the owner of an Apple Watch (Series 7).

[ Of course, since I got it, Apple announced and released the Series 8 … great timing! ]

The Apple Watch has been around since 2015 so I’m not going to do a deep-dive review or anything, but touch on some points specific to my expectations and experience.

My 45mm Apple Watch is slightly larger (wider) and slightly heavier than the Fitbit Charge 4, but it’s not really that noticeable on my wrist and having a full-color touchscreen (instead of the Fitbit’s “tap only” interface) is worth it. I do sometimes miss the days of wearing different mechanical watches, but the wide variety of customizable watch faces in watchOS and availability of custom bands kinda makes up for it. Like with any new device, once out of the box I spent a lot of time scrolling through the various options and tweaking until I had everything the way I liked it (watch faces and complications, notifications, apps, etc.). And even though I’m right-handed and wear my watch on my left wrist, I flipped the crown/button orientation so they’re on the left side of the watch so I can use my thumb to scroll the crown instead of my index finger so I can use that finger to tap and swipe on the screen.

Unlike my wife’s Series 3, which has a cellular connection (so she doesn’t need her iPhone with her all the time), I have the WiFi-only version. I typically always have my phone nearby, but I did set up a playlist sync (least recently played) so some random music (why is there an 8gb limit?) will always be available on the watch in case I’m out walking and do forget my iPhone 12 Pro Max (I can sync podcasts too, with the iCatcher app, but it’s a user-initiated manual process). I did discover early on that Siri won’t work without internet access, and of course I can’t receive phone calls when the watch is out of range from the phone. My wife takes her watch off to charge overnight but I wanted to be able to wear my watch all day, like my Fitbit (see more on sleep tracking below). My Series 7 has USB-C fast charging so I typically drop it on its charger during my morning meetings (when I’m sitting stationary at my desk anyway) and it’s fully charged up in under 30 minutes and good until the next day.

I used my Fitbit for two primary purposes: tracking steps, and tracking sleep, and it did both of those very well. Since (Google-owned) Fitbit didn’t integrate with Apple’s Health app, I’d been using PowerSync to load my steps and sleep data into it. Thus I’ve been using the Health app for a while, but I’d never used the Fitness app. If you own an Apple Watch (or know someone who does), you’re probably familiar with the “closing my rings!” mentality. Apple Fitness (and Fitness+) focuses on three areas: Move (red ring), Exercise (green ring), and Stand (blue ring) and you set your daily goals for each (in calories, minutes, and hours, respectively). Steps and flights data is still in there, they’re just not the primary metric so now I’m focused on wider activity instead of just reaching my step goal (Apple doesn’t even show steps added in individual workouts, like walks). When I first started wearing it, I felt like my daily step counts and distances were lower than the Fitbit, but that seems to have evened out (either that, or I’m just used to the new stats). I’ve also gotten used to starting a workout (like out nightly walk) to make sure the “exercise” is recorded otherwise I won’t close that ring. Like the Fitbit, 10 minutes before the top of the hour, the watch will remind me if I need to do some standing to help close that ring. All of this activity is also automatically loaded into the Health app (so no more manual syncing my Fitbit).

I find the Apple Watch’s sleep tracking to be a bit more finicky and frustrating. All of my Fitbits did a great job of automatically tracking sleep without any interaction from me (they would even pick up my occasional midday nap). The Apple Watch relies on sleep schedules you create in the Health app on the watch or iPhone. The schedule is used to turn on the Sleep Focus mode at your set bedtime and then use an alarm to wake you up in the morning. The Apple Watch then records your time in bed and time asleep (although now with iOS 16 they added better sleep mode detection like REM, Core, and Deep) but like the step tracking I feel tis setup is less accurate than my Fitbit. How it works also doesn’t seem as flexible to me compared to having to do nothing on the Fitbit. You can turn off the alarm for “tomorrow” but what if I’ve got a few vacation days (or, like this week, am at home due to the hurricane) and want to sleep in? I either have to remember to turn off tomorrow’s alarm each evening, or create a brand new schedule without an obvious way to disable the existing ones (I have one for weekdays and one for the weekend), it’s all or nothing. And if I take a midday nap and don’t think to toggle Sleep Focus first, the watch doesn’t seem to detect that I was asleep.

I do like getting push notifications on my wrist … especially 2-factor authentication prompts from Microsoft services which we use heavily at work. Being able to just tap “approve” on my watch instead of picking up and unlocking my phone is pretty convenient. I can also quickly interact with HSBuddy alerts from my home automation system, or read the occasional text message (I still prefer using the phone to send messages, though, the keyboard on the watch is pretty small). I’ve also started using iOS shortcuts and automations specifically for the watch, like turning on silent mode and switching to a night-friendly watch face at bedtime, setting different watch faces in the morning for weekdays and weekends, even giving myself a classic Mickey watch when we go over to Disney World! 😉 As for apps, for the most part I find the on-watch versions of apps less useful. So other than Microsoft Authenticator (for the aforementioned 2FA notifications), Carrot Weather, Fantastical, and LastPass, I’m only using the built-in stuff.

45mm Apple Watch on my wrist

set watch face based on day of the week