Hey, just so you know ... this post is now about 3 years and 3 months old. Please keep that in mind as it very well may contain broken links and/or outdated information.

I’ve been using Google Photos since it was announced back in 2015 as a belt-and-suspenders second cloud backup of my photo library (my primary backups are still in SpiderOak). I was using the “High Quality” setting since most of my photos are less than 16MP and didn’t want to pay for the extra storage required for “Original Quality.” For no real reason (other than wanting to get more out of my $99/year Amazon Prime subscription), I decided to switch to Amazon Prime Photos on my Amazon Drive.

With Google Photos, I had to run the app on my PC to keep my local library in sync with Google. This was a bit of a pain since all of my photos are actually stored on my NAS. The app allowed me to point it to a mapped drive, so that wasn’t a problem, but this setup did mean my PC had to be on for syncing to take place. The Cloud Sync app on my Synology DiskStation supports Amazon Drive, so I was able to set up a job to only sync photos from specific folders on my NAS (I didn’t want to bother uploading all the thumbnail resizes from my Piwigo web photo gallery, for example). 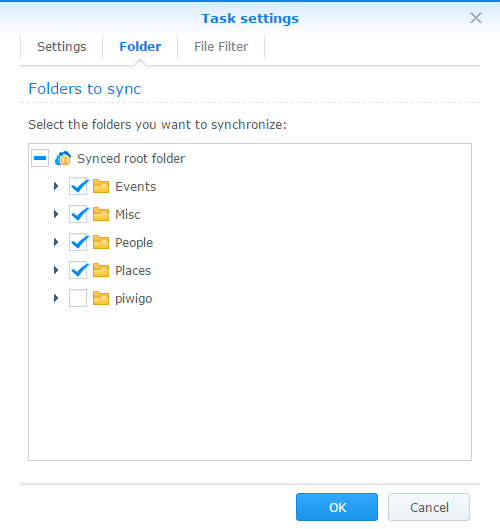 Amazon Prime Photos gives you unlimited photo storage (no quality/size restrictions) but unlike Google Photos your videos and other files count towards your quota (which is 5gb, unless you upgrade your plan). So I used the File Filter in Cloud Sync to limit the sync to just image files: 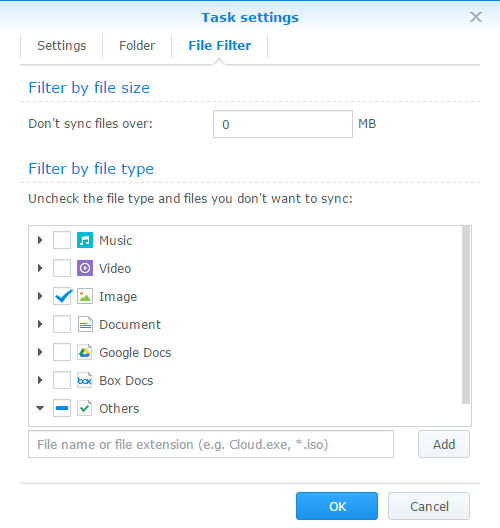 It took Cloud Sync just under a day to upload ~42,000 photos (56gb) to my Amazon Drive, and it happened all directly on my NAS without the need for my PC. One less Windows app running in the background! 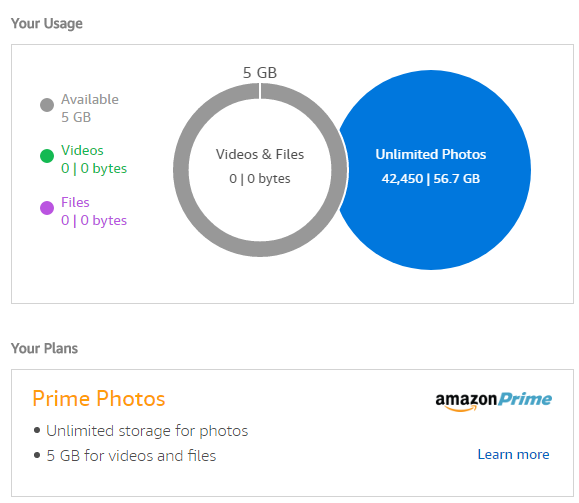 Once your photos are on your Amazon Drive you can take advantage of features like the Family Vault (to easily share uploaded photos with family members), or, like Google Photos, auto-tagging of People, Places, and Things (I apparently have ~1.6k photos with “trees” in them). The face tagging for people is a little creepy (as is Google’s) but it is nice to be able to easily filter photos based on people. You can edit the People tags, combining as necessary (for example, kids as they grow older get identified as different people).

One final complaint about Google Photos. Once all of my photos were uploaded to my Amazon Drive, I wanted to delete all of them from Google Photos. Wow, is that an unnecessarily painful process! There’s no “delete everything” button and from what I could tell, no easy way to just dump all of my photos from Google’s servers. Instead, I had to select groups of photos at a time (select the first one, scroll, scroll, scroll, scroll, Shift-select another one to highlight the group) and delete them. You can only delete ~1,500 photos at a time however, and most of the time the deletes would fail. So I had to manually select groups of 800-900 photos, delete, wait for the refresh, then select another group. And I had to do that for over 42,000 photos!! I think that almost took longer than uploading all of those photos to Amazon. And really, there’s no guarantee those photos are actually gone from Google’s servers, I just can’t see them in Google Photos anymore (so I hope they’re gone).

Now that I’m using Amazon Drive for photos, I really wish it worked with Amazon Music. I’m paying $25/year (on top of Prime) for Amazon Music just so I can play my local collection through my Echo. That requires another separate Windows app to sync my music library with the Amazon cloud. If Amazon Music worked from Amazon Drive, I could just set up another Cloud Sync task to keep my music library on the NAS in sync with the cloud all in the background, just like my photos. But that’s a different complaint …