Hey, just so you know ... this post is now about 9 years and 9 months old. Please keep that in mind as it very well may contain broken links and/or outdated information.

I’ve evacuated from a jet (on the tarmac) and gone down the emergency slides during a passenger-initiated evacuation (back in 2003 when someone thought there was an engine fire).

I’ve been to a GWAR concert.

All of that pales in comparison with what I had to do today: coach a bunch of 9- to 12-year olds in a basketball scrimmage. 😯

My daughter has started taking basketball lessons at a local rec center and on Saturdays there are league games. This was the first day of the league so the coach who runs the program did a rundown for the parents and kids present of how the games work, the schedule, the rules, etc., etc. Then it was time for the game. There were only 13 kids there so they were split them into two teams (red and blue). One dad had already volunteered to be a scrimmage coach for the spring season, but another volunteer was needed for the other team (the guy who runs the program is the referee). Before any of the other dads present could jump in (assuming they would have), the head coach/ref points at me in the bleachers and says “you’ll help me out, right? Come on down.” I tried to protest that I know nothing about coaching basketball but he wouldn’t hear of it (and it didn’t help that I was wearing a Dayton Flyers t-shirt, so he probably knew I had been watching the recent NIT tournament). Talk about being on the spot!

Now, I obviously enjoy watching and attending sports … but that’s where my “expertise” ends. I can’t really talk sports, I don’t follow statistics, I’m not that familiar with rules, I don’t know strategies, and I especially know nothing about coaching!

But before I knew it, I was on the sideline helping the kids get into their red team and blue team jerseys (luckily I didn’t have my daughter on my team). The game consisted of two 20-minute halves, with mandated substitutions every 5 minutes (to make sure everyone got to play). I had a team of 7 so I had to do two substitutions each time. The kids were wide-ranging in skill levels, so I had two strong, older players, two intermediate kids, and then 3 real beginners (“just keep at least one kid on the court who knows how to dribble” the coach told me). I stood on the sideline trying to shout words of encouragement while mentally juggling who I had to take out/put in, what the score was, etc. I knew I was in trouble when during a time-out one of the older kids said to me “Coach, can we switch from man-to-man to zone?” and all I could say back was “uh, sure?” You know how you should never show fear? Yeah, well, I think I failed at that … these kids knew I had no idea what I was doing and I was stressed out. 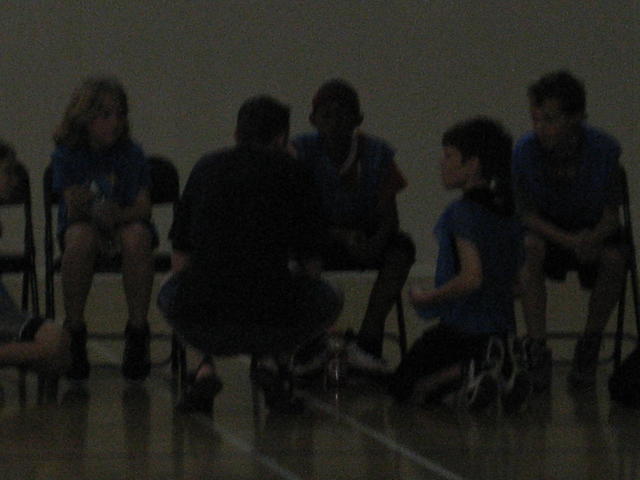 I think the game ended in a tie, but man, that was a harrowing 40 minutes! The other team’s coach obviously had more experience than me, which probably made me look even more incompetent to the parents in the bleachers on the other side of the court. I could just imagine the grumblings going on over there, but as my wife told me after the game: if they didn’t like it, they could volunteer next time.