Hey, just so you know ... this post is now about 9 years and 11 months old. Please keep that in mind as it very well may contain broken links and/or outdated information.

8:15am: we got up early, refreshed (and adjusted to the 3 hour timezone difference). We’re eating breakfast at the Paradise Cafe and then heading over to Camelback Mountain for some hiking.

9:18am: we’re at the head of the Echo Canyon trail of Camelback Mountain. Parking is ridiculously limited, so we had to drive around to find some available street parking. It took us 20 minutes to walk here from the car, so at least that was a good warm-up for the climb ahead. The trail is 1.2 miles long and the summit is 2,704 feet up!

10:22am: we reached the summit! It was an amazing hike/climb and a pretty good workout. We were much better prepared than last year (appropriate clothing/shoes, water, etc.) so that probably helped. The views are amazing up here (and I even had 3G coverage on my iPhone!). 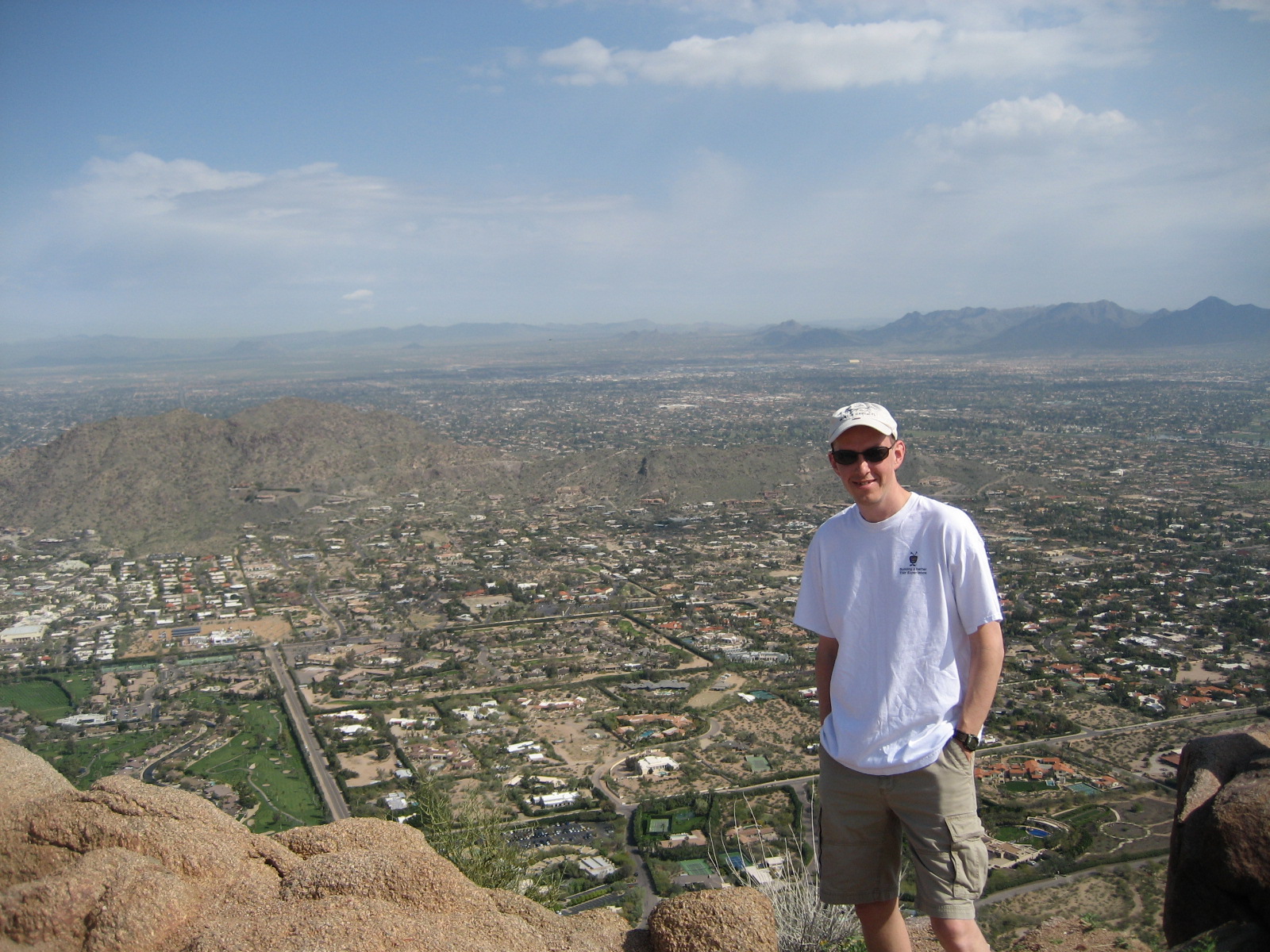 11:41am: we made it back down. It took us an hour to get up, and then 56 minutes to get back down. Time to head over to Scottsdale for the baseball game.

12:55pm: parking around the Scottsdale Stadium is crazy. We drove around for quite a bit and finally found street parking about a 10 minute walk away. We still made it into our seats before the national anthem though, in the bleachers down the third base line. Another beautiful day to be out at the ballpark. 430′ to center field here … not an easy place for home runs. 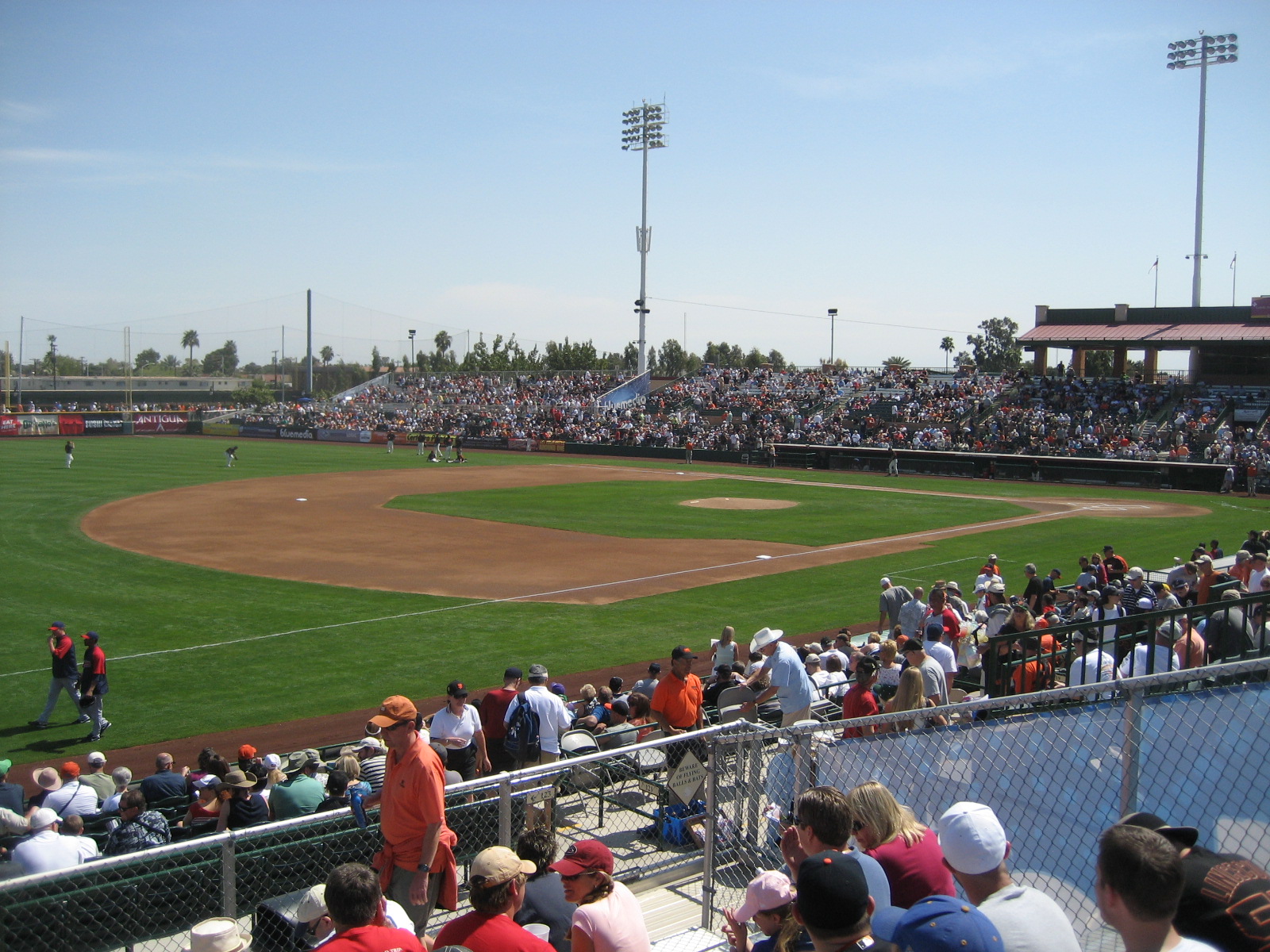 4:11pm: a great game, but the Indians lost. The Giants started out with a 5-0 lead, but the Indians came slowly back and eventually had it tied up at 6 in the 7th. But San Francisco score the go-ahead run in the 8th and the Tribe couldn’t answer. 7-6 Giants win. The stadium was packed! Over 12,000 in attendance, wow. Walking out of the park, we met an older gentleman wearing a Indians jersey (Bob Feller #19) jersey who told us he actually saw Feller pitch a no-hitter in 1950. He was kind enough to take this picture for us: 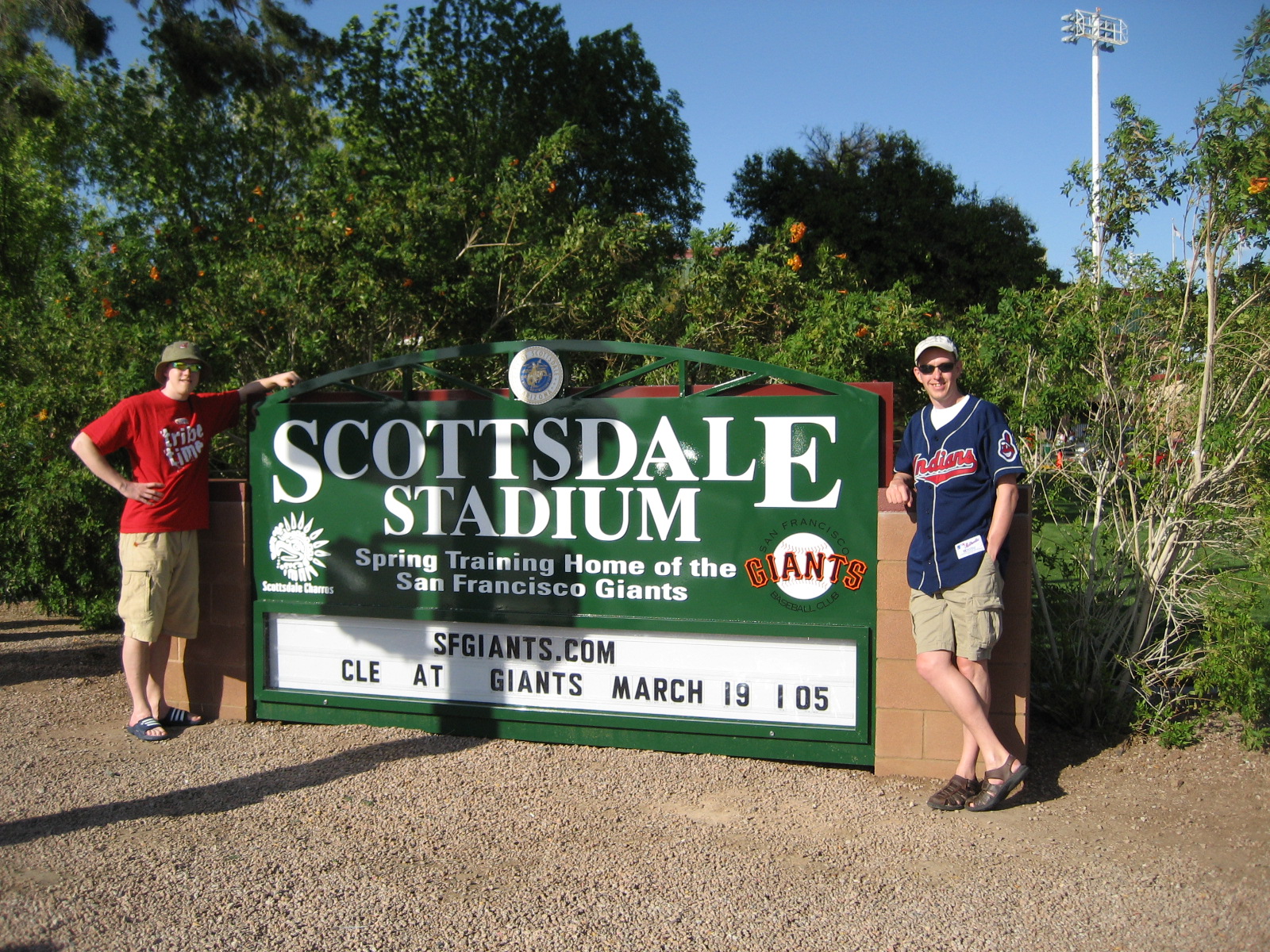 5:30pm: it took us a long time to get back to the hotel in Avondale from Scottsdale, rush hour traffic around downtown and I-10. Time for a quick shower, a change of clothes, and then back downtown for the basketball game.

6:48pm: getting downtown and parked for the US Airways Center was remarkably easy. We’re in our seats (with some dinner) ready for the game to start. R U ORANGE? 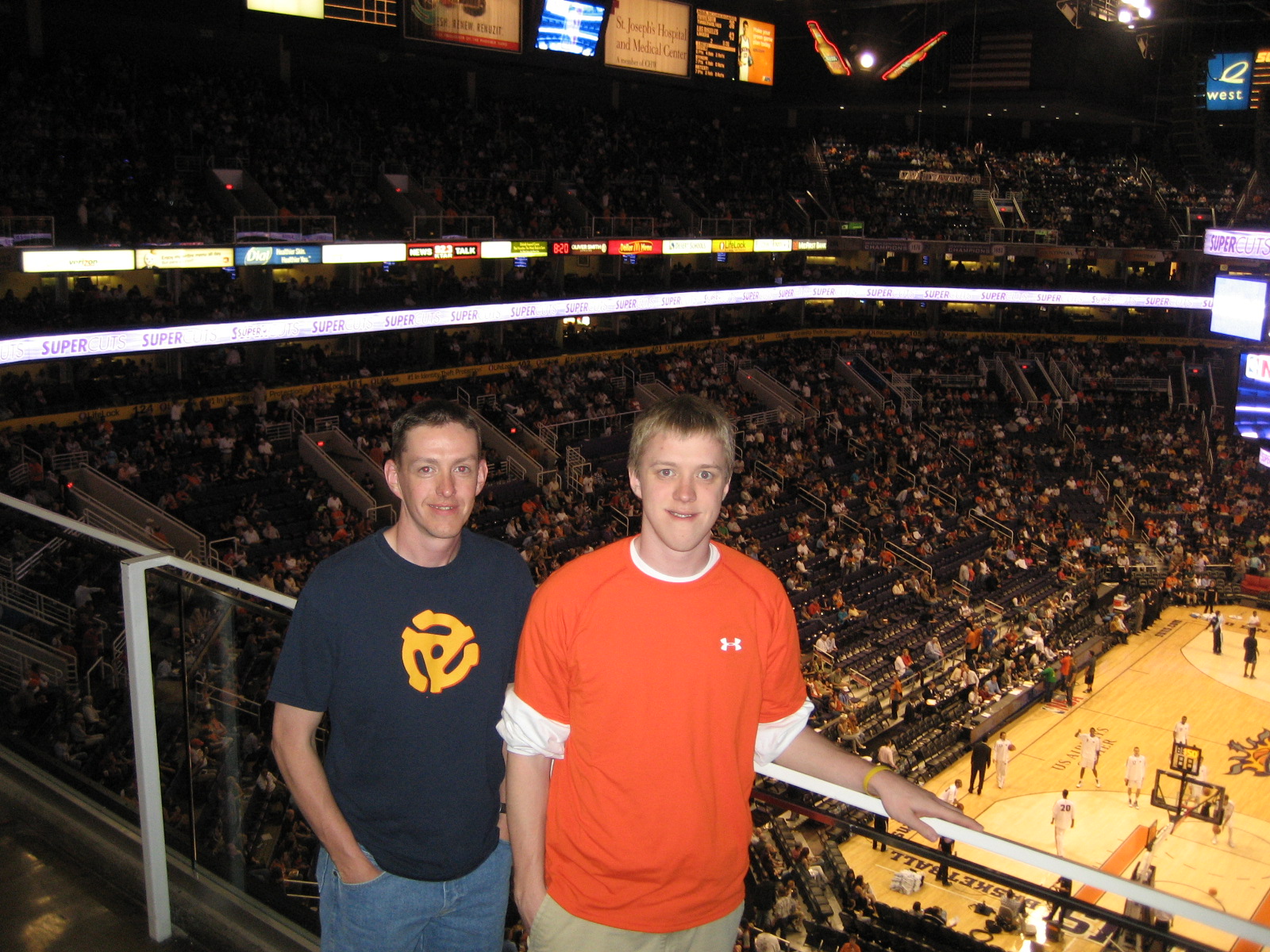 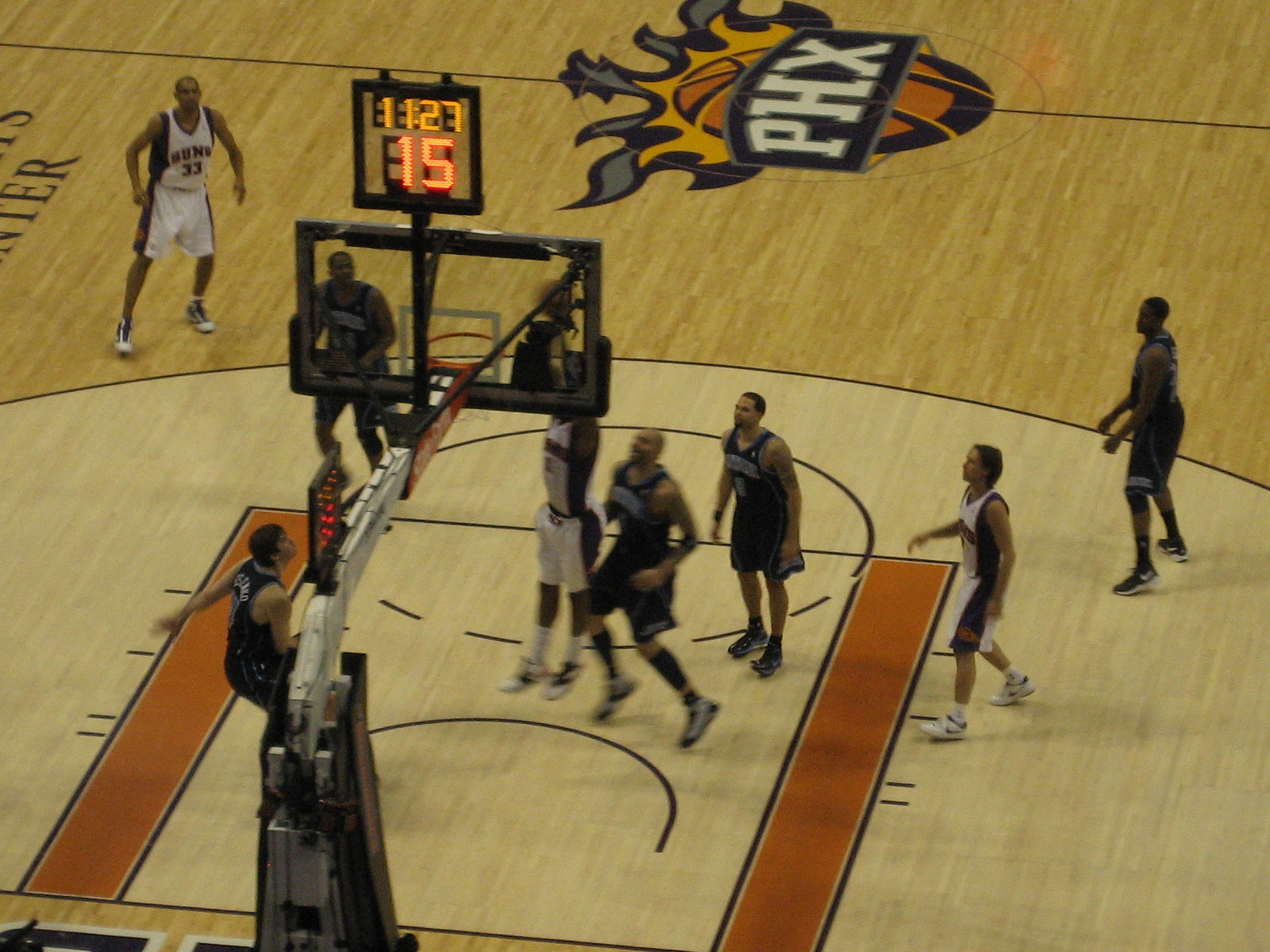 9:36pm: the Suns win over the Jazz 110-100. Stoudemire was on fire and recent Vancouver winter Olympics torch bearer Steve Nash had a good game as well. We’re going to head across the street to the Hard Rock Cafe so my brother can pick up a pair of drumsticks. On the way out of downtown we’re going to drive past Chase Field, home of the Arizona Diamondbacks. So far, the home team of every game we’ve seen has won. Hopefully that bodes well for the Indians game tomorrow.

10:42pm: catching up on some NCAA tournament action via SportsCenter before heading to bed.